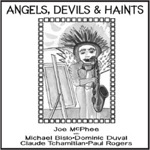 Angels, Devils & Haints is a beautifully unusual tribute record. The project was conceived by saxophonist Joe McPhee as a tribute to the great Albert Ayler, but doesn't include any of Ayler's tunes. The lineup—McPhee (tenor and alto saxophones and pocket trumpet) with a quartet of bassists—isn't an instrumentation Ayler ever used. And yet, from the outset, the dedication is wonderfully apparent.

McPhee bifurcates the two principal elements of Ayler's sound, the soulful sax cry and the fantastically maddening, childlike melodies and retains only the former. There is nothing here of Ayler's incessant repetitions, his transcendent, sing-song pounding. There are no drums, piano or harpsichord to set the music like a game of four-square. There is only the wail, the mysteriously powerful yet precarious scream of Ayler's sax, isolated and then projected across the whole of the quintet, like the dedicatee's soul put under a microscope.

This is a remarkable achievement and one for which McPhee is uniquely suited. He works with context, which is why he's able to find nooks and crannies, and Ayler's music is clearly important to him. McPhee writes in the disc's notes that he had been unable to take up an invitation from Ayler's brother, trumpeter Donald, to sit in with the band in 1965. The opportunity didn't knock again. 35 years later he assembled the tribute as "a personal celebration of the change of the century" and brought the band to the Europa Jazz and Action Jazz festivals in France. (Another indirect tribute, perhaps: Ayler had a particular love for the French national anthem and played it regularly.) And while the group doesn't play Ayler's own compositions, the album does include two pieces that Ayler recorded in 1964, the spiritual "Goin' Home'" and Rodgers-Hammerstein's "Ol' Man River." But the bulk of the album is given to long, wonderful, mournful group improvisations. The river of this tribute runs deep.