By Mathew Bahl
December 1, 2000
Sign in to view read count 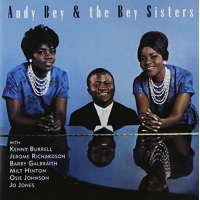 Andy Bey's two rapturously received late '90s CDs, Ballads, Blues & Bey and Shades of Bey, were seen as something of a reinvention for the singer/pianist whose work over the previous 25 years, nearly all as a guest vocalist on other artists' albums, had been more than a little on the esoteric side. However, Prestige's current reissue, Andy Bey & the Bey Sisters, suggests that Mr. Bey's move to the mainstream of jazz singing was actually a return to his roots. From 1956 to 1967, Mr. Bey worked has part of a vocal trio with his sisters, Salome and Geraldine. Andy Bey & the Bey Sisters seemed to have recorded only three albums during those eleven years: a rock and roll collection for RCA and the two very good jazz records for Prestige included on this CD.

Jazz vocal groups tend to follow one of two models. Some fashion a sound around the differences in the individual voices (the Lambert, Hendricks & Ross theory). The more common method is to achieve a harmonization of the voices with one voice occasionally singing lead (the Boswell Sisters model). Interestingly, Andy Bey & the Bey Sisters tried to carve out something of a middle path. Their approach to group singing drew as much from the gospel music of the black churches as it did from jazz. Salome Bey had a heavy Blues-inflected sound. Geraldine Bey had a lighter, more flexible alto. Andy Bey had a baritone with an extremely wide range. When they brought their voices together they achieved a distinctive group sound where even their vibratos moved in unison. It was a deep, low, rich sound that reflected the obvious influence of fellow Newark, New Jersey native Sarah Vaughan. Yet, it was also a style that left room for their individual characteristics to shine through.

In addition to his vocal duties, Mr. Bey functioned as the group's pianist. For these recordings, Prestige rounded out the rhythm section with some of the label's best players. The first ten tracks come from the album Now!Hear!, recorded in 1964, and they benefit from the presence of Jerome Richardson on flute and tenor saxophone. The second ten songs were recorded in 1965 and were released as 'Round Midnight.

The process that every singer goes through in deciding whether a particular tune fits his or her voice and style is an even more complicated exercise for vocal groups. For example, Andy Bey & the Bey Sisters' approach lends an unexpected weight to the pop tune "A Taste of Honey" and the show tune "Night Song," but it doesn't really work on Jobim's "Quiet Nights of Quiet Stars" which is easily the best song of the three. Mr. Bey takes center stage on several of the tracks most notably on a reading of "Since I Fell for You" that foreshadows the sound he would display on his late 90s comeback recordings. However, Mr. Bey never really dominates the group. Geraldine sings the lead on "Tammy" and Salome's earthy sound anchors the unison arrangements of "Solitude" and "God Bless the Child." All three display an impressive understanding of group dynamics on a rollicking "Just Squeeze Me" and a bluesy "Willow Weep for Me." No jazz vocal group in the 1960s could escape the influence of Lambert, Hendricks & Ross. "Sister Sadie" and "The Swingin Preacher," both of which feature Mr. Bey's scat singing, have an unmistakable LH&R groove.

Andy Bey & the Bey Sisters is a welcome reissue that not only sheds new light on Andy Bey's early career, but reintroduces the jazz audience to an often overlooked entry on the rather short list of good jazz vocal groups.

Willow Weep for Me, A Taste of Honey, Quiet Nights of Quiet Stars, Sister Sadie, Since I Fell for You, Night Song, Besame Mucho, September in the Rain, The Swingin Preacher, Smiles, Love is Just Around the Corner/I Love You/Love You Madly, God Bless the Child, Squeeze Me, Tammy, Hallelujah I Love Her So, Everybody Loves My Baby, 'Round Midnight, Solitude, Feeling Good, Ev'ry Time We Say Goodbye.