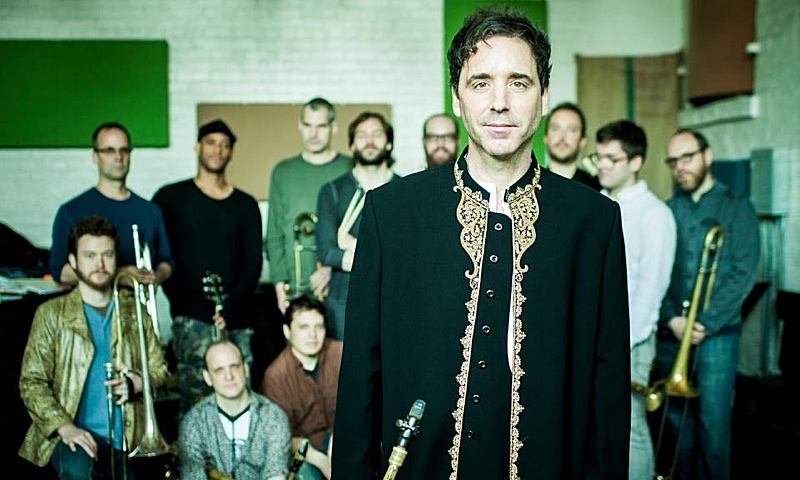 By DANIEL LEHNER
October 14, 2014
Sign in to view read count
The album artwork for Andrew D'Angelo's Norman features the album's namesake, D'Angelo's grandfather, as a young man, seated slyly and serenely. The significance of naming the album "Norman" was not only a nod to the fact that D'Angelo bears that as his middle name, but also that the album is dedicated in part to D'Angelo's mother.

"I really wanted to make a record basically for my mother. Because, I mean, can you imagine what it's like watching your son go through brain cancer?"

It's still deeply unsettling, even long since after getting a bill of complete recovery from doctors, to think that about seven years ago, D'Angelo was given a prognosis that he'd be dead within a year. One year turned to three, and eventually D'Angelo was told that the cancer would never come back. Still, the lingering story of D'Angelo's cancer struggle imprints itself onto Norman, a trio album that will reunite him with his other Gay Disco bandmates, bassist Trevor Dunn and drummer Jim Black.

"I did these two brain surgeries and I couldn't play, so I sat and wrote the music on the record. The people I played it for said that it really sounded like a different me. It's definitely softer. I think that many people who go through a major health crisis and miraculously come out the other end alive would have some understanding of life. I worked with a lot of medical intuitives, light healers, energy healers, etc. and I mean, love is the highest vibration there is. Love heals. I won't say I got there immediately but the music I was playing and working on was coming from that place of love, which to me is a softer sound and a higher vibration."

On the other end of the spectrum, D'Angelo could identify that, if the music produced after his clean bill was of a higher, softer love vibration, the music made during the struggle was possibly edgier and harder because of it. Beyond just speculation, D'Angelo could point to a medical reason for this phenomenon. "Immediately following the brain surgery, they took out my right frontal lobe," D'Angelo explained, "and one of the side effects of that is anger, because your humor is effected by that part of the brain. I was also on anti-seizure medication, one of the side effects of which was agitation, so I'm not necessarily blaming any of that for my mood, but yeah, I was pissed off. Oddly enough, I didn't know that at the time until a friend showed it to me."

The tracks that make up Norman are from different time periods, but the most recently written one, the gorgeous title track written by fellow reedist Bill McHenry, is the most recent and can be directly traced to D'Angelo's cancer status. "I've talked to Bill about this and he said he fretted over it," D'Angelo recalled. "He was writing it when I was in the hospital, so it could have very well been performed at my funeral, just as it could have been played at my celebration. Bill was certain that it would be played at my celebration, though. But he'd said to me, 'this is a really important song for me and I need to hear you play it and it's your song, not mine.'"

Norman will be the first recording D'Angelo will put out as an LP. The decision to release it on vinyl also relates back to D'Angelo's mother. "I though, what the heck? I'll not only release a record, called 'Norman,' which is my mom's dad and my middle name, but I'll make an LP so that my mom can be psyched about playing it on a turntable."

Family and friends had made for strong sources of inspiration when it came to the music on Norman. D'Angelo explained, "That song, 'Enzo,' which is the name of my nephew, I wrote that when he was eight and he's now 21 or so. He's kind of this mafia looking kid; his name is Enzo Augustine D'Angelo-Patricio. He's big but he's real sweet. So I wrote it for him when he was eight and I just shelved it. I wrote it and I recorded it with Ben Street and Jeff Ballard, but that never came out. There was something about it; it was very soft. It was almost like it was foreshadowing a future version of myself."

Softness is a major theme in the slight departure of this realm of D'Angelo's music versus his previous output, ascribed to the aforementioned love vibrations in his post-recovery phase. It's even referenced in the liner notes (written by his brother Thomas D'Angelo) that the music sometimes sounds like a different Andrew D'Angelo. But in addition to the gentler, more introspective sounds of tunes like "Norman" and "Enzo," there are also simmering, groove-oriented jaunts, some of which reference D'Angelo's musical compatriots.

"That song, 'St. Lawrence,' I wrote for Jim [Black]; his middle name is Lawrence. I really wrote it out of love, because he was so supportive during that time. You've heard people writing songs for people's sounds, like Duke Ellington writing for Johnny Hodges, and it's usually for melodic stuff. Jim has this sound that I can write for, because I can hear him sound so fucking great on that groove. I've known Jim since I was 14, which is way over half my lifetime. Jim and I have this thing, we could probably go over 15 years without playing with each other and there'd still be this telepathy that would happen."

D'Angelo hadn't recorded with Dunn or Black in eight years, but to him, there was no difference in getting back in the studio with them, apart from perhaps a change in him. "I would say the only difference would be with me—not with those two. Because, for one, I had this surgery and my personality was changing and also I hadn't played in a long time, so I was getting back to my instrument, though by the time I had gone to do the record, I had been playing a lot again. They had stayed strong, you know, they had been working and making music and I come out of the hospital saying, "Hey let's go make a record.' So the change is with me."

Norman was designed to feel like a film or a book—a narrative that has moments of anger, sadness, triumph and pain. The moments of D'Angelo's intense pain are captured within the wily, unaccompanied bass clarinet paintings that sprawl over the "Vota Ju Intro." The "Vota Ju" track itself, however, moves into more reflective, easier-going territory that eventually settles into a gentle, partially sung melody (a first for D'Angelo), encapsulating his journey into peace.

Bass clarinet makes another appearance on the track "Skrosh," but the artistic impetus behind it was more strictly musical. "I was sitting and writing music and I've rarely heard very many bass clarinet compositions in jazz that I found enjoyable. I wanted to write something that I thought was interesting. So I was hearing where the bass clarinet and the bass would, all of a sudden, just hook up together for a minute and then separate again. Because really, the bass clarinet is an excellent bass instrument—maybe even more so than a melody instrument. I was just experimenting. Actually, that song 'Skrosh' is from me transcribing one of my own lines and developed it and went from there."

However, for all of it's newly discovered moments of the sublime post-recovery, Norman is still a Gay Disco Trio record and, most things being cyclical in at least some way, D'Angelo ropes things back to some of the original trio material with a redux of the track "Gay Disco" with a rendition entitled "Gay Crisco." It's a real moment of explosive and frenetic energy amidst a largely reflective album and it paints D'Angelo, through the gestalt of "Norman" as a complex and still fascinating composer and performer. Of these dualities, D'Angelo simply stated, "It's kind of an older version of myself I still tap into sometimes."