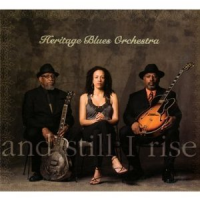 If ever there was a perfect title for a blues record, it has to be And Still I Rise , serving notice that the Heritage Blues Orchestra is a revival force with which to be reckoned. The group dishes out pure blues, blending greasy gut-bucket, hallelujah gospel, down home country, Chicago's South Side and everything in between. Fronted by venerable veterans Bill Sims Jr. and Junior Mack, on vocals and guitars, and also featuring singer Chaney Sims, this record is a tutorial on the blues and why it is so vitally enduring.

With three magnificent singers, the trio takes turns on lead vocals beginning with Mack covering Son House in "Clarksdale Moan," Eric Bibb's "Don't Ever Let Nobody Drag Your Spirit Down" and in his own "Chilly Jordan." Proving he is a marvelous vocalist, Mack also contributes a genuine touch with his masterful slide guitar work throughout.

Bill Sims, Jr. takes over vocal duties on Muddy Waters's standard, "Catfish Blues," the straight shooting "Big Legged Woman" and down-and-dirty "Going Uptown." Chaney Sims not only sings beautiful accompaniment, but shines on "C-Line Woman" and delivers a poignant version of Leadbelly's moaning "Go Down Hannah," reminiscent of the work songs from the infamous chain gangs. All three singers join in on the traditional "Get Right Church," and "In the Morning," which are as pure gospel as could be expected on any given Sunday, entering that inner sanctuary where singers display feeling and the soul they picked up along the way. The record ends with the call-and-response of "Hard Times," which trails off into a jazzy dirge back up to a rousing finale.

Though it's a reality that the blues has never gone away, and there are countless qualified and experienced musicians still out there doing it for the love of the music, the Heritage Blues Orchestra is a welcome new sound bringing a sense of urgency to the blues, and And Still I Rise is an invigorating indication of renewal.