By Dan McClenaghan
September 14, 2020
Sign in to view read count 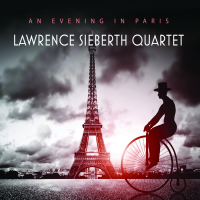 New Orleans-based pianist Lawrence Sieberth is a versatile music man—a bandleader, keyboard accompanist, composer, producer. A trip to Paris and a teaming with Parisian players resulted in An Evening In Paris, an atmospherically cohesive set that covers a wide range of styles.

The set of eight Sieberth originals opens with "August," a tune that exudes the loveliest of straight ahead moods—deceptively, perhaps. There is a gentleness and delicacy to the sound initially, saxophonist Stephane Guillaume blowing cool, in a Stan Getz-ian mode. Sieberth's piano is as lush and pretty as can be. Then the sax solo goes out there, in a nuanced way, to the edge. Then the theme resurfaces, and the intensity level cracks up, turning the tune into an anthem.

If the opener could be tagged mainstream, "The Phantom" moves over to a modern funk sound, dark and relentless, riding the rhythmic angularity of bassist Michel Benita and drummer Jeff Boudreaux. Out of this Sieberth lays down an eerie, crinkly solo that smooths out in an ominous groove, the quartet locked into each other's musical mind sets. "La Valse Parisienne" has a melancholy, late night feel, featuring Guillaume's smooth as silk soprano sax, while "A Melody's Tale" brings a brighter, more hopeful feeling.

The compelling cover art—a man in a fashionable chapeau atop one of those early twentieth century bicycles with the impossibly big front wheels, about to eclipse the Eiffel Tower under a breakup of dark clouds—could fool you into thinking that an old timey music is at hand. But Sieberth's artistry is anything but old timey, the prickly, driving "Kinetic #8" having twenty-first century written all over it, while "Lessons In The Fast Lane," the set's closer, opens with saxophonist Guillaume and pianist Siebert engaged in a wild chase down the freeway, before they go off road, picking their ways carefully over open fields of free jazz, skirting the boulder outcroppings and the gullies, as clouds gather and drummer Boudreaux rumbles out some thunder, until the freeway is achieved again, full speed ahead.