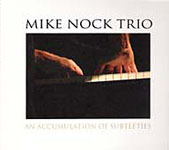 As fine as Mike Nock's recent releases have been—Meeting of the Waters (Jazzhead, 2007) and Live (ABC Jazz, 2004)—the New Zealand-born, Australian-based pianist's primary focus has been on larger ensembles. They may have provided Nock a broader textural palette with which to explore his always-compelling writing, but they've lacked the inherent intimacy and unfettered abandon possible in the more liberated context of the trio, last heard nearly a decade ago on Nock's sublime Changing Seasons (DIW, 2002).

An Accumulation of Subtleties finds Nock in the company of a relatively new trio, with brothers Ben (bass) and James Waples (drums) demonstrating the kind of empathy only possible through sibling familiarity. With one disc of largely free improvisations recorded in the summer of 2008 at the Sydney Opera House Studio, and a second culled from a weekend performance at the Sound Lounge in Sydney a couple months later, one set may focus predominantly on pulling music out of the ether while the other is about expanding on preconceived form. Both, however, are about the magic of spontaneity, and the sound of surprise which comes from constantly honed chemistry.

Nock's melancholic title track positions the three-way conversational nature of his trio from the get-go; its empathic interaction then traveling from spare but lyrical abstraction to more abstruse territory on the aptly titled "Joyous Awakening," where James' brushwork is as thematically focused as his trio mates' more over lyricism. Nock explores possibilities both inside and outside the piano box on the oblique "Rite of Passage," as the trio assumes a more assertive stance, resolving into angular interplay; but it's "Apotheosis" that spotlights the trio's greatest strengths. Moving organically from a repetition-based bass solo to economical but unmistakable interaction, harmonic and rhythmic form gradually emerges over the course of twelve minutes, building to a powerful climax that, ultimately, dissolves back to its opening bass-centric motif.

Nock's "Elsewhen" opens the live set in rubato freedom, but ultimately turns to an arpeggio-based melody reminiscent of Ondas (ECM, 1982). Nock is not unlike American pianist Marc Copland in his ability to twist convention on its side without losing site of thematic focus, but his touch is stronger, his approach more direct. Driven by James' brushes, Nock's lyrical "Beautiful Stranger" nods to the American tradition and a hint of Latin pulse, while "A Tree Has Its Heart In Its Roots" demonstrates his more complex compositional side, even as it revolves around a middle-section vamp that finds the trio back in the same open-ended territory as on the first disc.

The finger-snapping blues of Gigi Gryce's "House of Blue Lights" and a viscerally swinging version of Billy Reid's "The Gypsy" demonstrate the trio's acumen with the standards repertoire. That Nock hasn't enjoyed the same celebrity as pianists like Keith Jarrett is more a matter of geography than talent. With An Accumulation of Subtleties, Nock returns to the trio format for one of his most open-ended and immediate albums of joyous abandon, introducing a new line-up that's already delivering, but promises even greater things to come.

CD1: An Accumulation of Subtleties; Joyous Awakening; Rite of Passage; Makeru Ga Kachi; Apotheosis. CD2: Elsewhen; Beautiful Stranger; The Wind; House of Blue Lights; A Tree Has Its Heart In Its Roots; The Gypsy.