BY JOHANNES VOELZ
April 3, 2004
Sign in to view read count 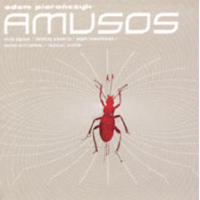 He has released ten CDs under his own name, yet hardly anyone seems to have heard of him in the US. He has played with the most talented musicians of his country, yet international talent scouts have continuously overlooked him. Saxophonist Adam Pieronczyk, to be sure, is one of those well-kept secrets from the jazz periphery of Eastern Europe, a fully matured musician who just needs some spotlight to be discovered.

Born and raised in Poland, he has spent several years in Berlin, making records with people of renown such as bassist Ed Schuller and fellow tenorist Gary Thomas. That he has recently returned to Poland for the reason that he can find more work there than in the German capital tells you another thing about this periphery: the Polish scene is alive and kicking. While the old jazz activists of the Cold War era (like Pawel Brodowski, the editor of the oldest Polish jazz magazine, Jazz Forum ) complain bitterly about the difficulties jazz faces in a commercialized free market economy, the generation of the thirty-somethings has long come to terms with the new conditions. They wear expensive suits, know how to make the right phone call at the right moment, and always have their business card at hand. And most importantly, they play daring music, mixing Polish folk influences into the American jazz idiom, sometimes adding spices of electronica. And if they can't find the fitting sidemen at home they'll look for them all over Europe.

This is, in fact, the strategy Pieronczyk has chosen for "Amusos," his most recent and most ambitious record to this date. Sure, there are influences that connect him to the rest of the jazz world. Especially Steve Coleman's concept of multi-rhythmical structures permeates the record (no surprise, really, since Coleman in my eyes has set the standard of sophisticated hipness in Europe as well as elsewhere). Even Pieronczyk's shape of lines (he alternates between soprano, alto and tenor) has adopted some of the high-precision coolness of the Coleman-Osby kind, whereas he used to come much more out of a Coltrane-school on earlier records.

But there is much more to this CD than a Polish adaptation of M-BASE. In addition to his rhythm section of bassist Adam Kowalewski and drummer Daniel Schroeteler, Pieronczyk has included three musicians in the group that make for a sound that is both unique and compelling. There is Henning Sieverts, a bassist from Munich who plays cello only here, often racing through the jagged lines in unison with Pieronczyk's saxophones. At times, the two enter into a dialogue, following each other just a bit out of sync, raising the tension to an almost unbearable point.

Then there is singer Mina Agossi, who begins the record with the line "When You Fall in Love," sung even more lushly than Lady Day would have, thereby creating a contrast to the aforementioned coolness of the pieces' structures. But Agossi is also a scat artist, using rather uncommon syllables like rolled "r"s. Sometimes her cries are even reminiscent of birds. And this connects her to the third addition, Tadeusz Sudnik, the renowned experimentalist of analogue synthesizers, who adds a portion of exotica to the pieces, from bird cries to jungle rhythms. As if all of this were not strange enough, he also goes into pre-Techno beats that make "Amusos" sound like a mixture of M-Base and Kraftwerk.

Pieronczyk's music is challenging, no doubt. It isn't what you will find on a major label (for those who are interested in the more accessible Pieronczyk I recommend his outstanding trio record "Few Minutes in the Space," released on the Polish Gowi records). Yet, turning "Amusos" up on your stereo, you will feel torn apart somewhere between New York, Berlin and Krakow.