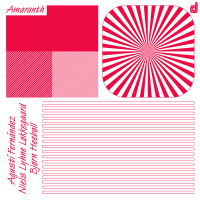 To call Spanish pianist Agustí Fernández an inside/outside player isn't to suggest that he dabbles in both straight-ahead and free jazz. As a free, improvising pianist, he is one of the most sensitive players in today's scene. No, calling Fernández an inside/outside player literally means he can often be found playing his instrument both from the outside —the keyboard, and the inside.

His latest release is a new trio with the Danish musicians Niels Lyhne Løkkegaard (SOUND X SOUND) and Bjørn Heebøll of Bodaboda Duo who released Modern Persuasion (Tyrfing, with Peter Brotzmann. The trio takes its cues from Fernández' work with Evan Parker and Paul Lytton. On the opening track "Frenetic Movement." Løkkegaard's alto wriggles through an ocean of liquid notes. The aptly named tracks here, telegraph the trio's direction. "Curved Movement" begins with the plonking of a stilted piano note, manually altered, then pulled and vibrated with croaking saxophone and scrapped cymbal. "Light Movement" is the quietist and perhaps the most intense piece here. The rumble and reverberations of Fernández' piano used, literally, as a music box, prime his partners to adopt a minimalist (almost ambient) style. Their switch from frenetic free jazz to a landscape soundtrack expands their depth and range.

Each of the eight pieces on "Movements" begs to be the title to a separate and an entirely new release. Is it too much to ask for an 8-CD boxset of this music?