BY CLIFFORD ALLEN
December 7, 2003
Sign in to view read count 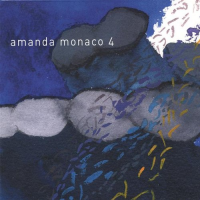 In jazz, a relative paucity of standout players has made the guitar an instrument ripe for the development of an interesting dialect. By nature, this paucity allows for a greater degree of individuality - there are many Freddie Hubbards but far fewer Attila Zollers. Amanda Monaco, a relative newcomer on the New York front, has studied with guitarists Ted Dunbar and Kenny Burrell, as well as pianist-composers Harold Mabern and Kenny Barron, and following work with a trio and the off-kilter cabaret music of the Lascivious Biddies (with whom Monaco still plays), she formed the iconoclastic quartet heard here in 2001.

Joined by tenorist Jason Gillenwater, bassist Fraser Hollins, and drummer Jeff Davis, the quartet romps through nine of the leader's originals, ranging from spry post bop to free improvisation. Monaco's guitar playing is well within the modernist canon, but quite distinctive: her phrasing is often made up of tartly dissonant chords and insistent yet off-kilter repetitions that remind one of Grant Green by way of Andrew Hill. She also has a tendency to solo out of tempo, frequently hanging pensively behind the rhythm section; luckily, her band is willing to follow these leads, causing most tunes to end on a decidedly different plane from where they began (see "Gaza Strip Mall" for a particularly fine example of this).

Monaco is also more a melodic than a chordal player; this, coupled with the absence of a piano, lends greater freedom to the proceedings than might be the case otherwise. Gillenwater takes the most advantage of this setting; he's a gifted improviser with a tendency for gutbucket honks and squawks, reminiscent of a young and fiery Joe Henderson or possibly Tony Malaby (though Wayne Shorter comes out in a few of the guitar-tenor unison themes). However, he does take more solo space than the leader, and at times his playing sounds a little forced. The compositional bag is rather varied; thematically "Gaza Strip Mall" is probably the most interesting piece, consisting of a sketchy yet stately middle-eastern folk melody, and featuring the aforementioned solo by Monaco and a firey excursion by Gillenwater.

"Go Lightly" and "D" are solid post bop numbers, though the soloing tends to outweigh their somewhat standard themes. The group does sound a bit self-conscious on the free "Speedy Green," as if it was a brief attempt to play "out." Freedom, in the context of this record, seems to work far better when it grows out of a piece, as in "Gaza." Furthermore, these nine tunes clock in at just over 50 minutes, lending an all-too-brief quality to some of the pieces. Brevity is sometimes a worthwhile quality, but with players like Monaco and Gillenwater, a bit more stretching room might help their efforts.

Amanda Monaco's debut as a leader is a welcome one. Her playing is utterly unique, a breath of fresh air in the cookie-cutter climes of both mainstream and free jazz. Gillenwater, too, is a powerful voice on his instrument; given time, he could really peel some paint. Hopefully the next release will erase a few shortcomings and provide a better idea of the improvisational fortitude that these players obviously possess.