By GLENN ASTARITA
April 9, 2015
Sign in to view read count 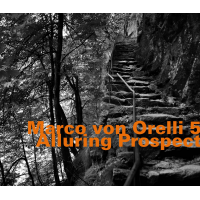 Estimable Swiss pianist and solo artist Michel Wintsch adds subtle synthesizer lines into various movements as he complements and retorts the hornists' clamorous thematic segments, tempered with wit and whimsy. At times the band gets a bit rowdy with terse statements and a profusion of contrasting improvisational encounters, synchronized with sinuous explorations. On the final track "Vita," Wintsch's simmering synth riffs and otherworldly treatments interconnect his band-mates' rugged developments. Here, the soloists are opposing forces engaging in battle. Yet they temper the pace and embark upon numerous modes of reinvention. Indeed, von Orelli is an active mind on the loose, evidenced on his second album for the Switzerland-based hatOLOGY record label. And his multifaceted arrangements present a loaded deck that tenders a 360-view of von Orelli's impressive talents and forward-looking vision.