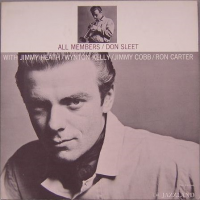 Jazz, like any commercial art form, is a proving ground populated by far more practitioners than actually make the cut. The analogy of an iceberg is apropos. For every musician whose talent rises above the sea of public opinion’s surface there are literally thousands of others that toil away in obscurity beneath the waves. In the spring of 61’ Don Sleet seemed set to become one of the chosen few situated for stardom. Formidable brass chops sharpened in gigs as diverse as the Howard Rumsey band and the San Diego Symphony combined with a comely mug (which incidentally graces the album cover replete with plenty of pomade) make comparisons to Chet Baker inevitable. But as his lone platter for Jazzland proves Sleet was very much his own man. Sadly his work on this outing did not parlay the promise of his talent into fame and fortune and he went the way of so many of his peers down the reclusive path of anonymity.

Leading a top-flight hard bop combo containing two thirds of the then current Miles Davis rhythm section and a third party that would join that famous fold momentarily Sleet teams up with tenor man Heath for a seven course meal of solid blowing vehicles. Compositional bookends by Clifford Jordan make surprising appearances and both “Brooklyn Bridge” and “The Hearing” showcase Sleet to fine effect. On the former the trumpeter sounds off with an opening rush of clipped phrases measured with lengthier lines. The latter tune mines similar melodic ore with Heath sounding in particularly fine form through a string of contemplative blues drenched choruses.

The ballad “But Beautiful” elaborates the band’s softer side with a superbly enunciated entreaty from the leader and an answering foray from Heath that furthers the romantic mood. The title track is infused with buoyant, infectious swing advanced through the singing tone of Sleet’s bell and the stately chordal ingenuity of Kelly. The rhythm section is largely unobtrusive, though Carter chimes in with a stringent arco solo on “Fast Company” that seems at odds with the temperaments of his partners. Ira Gitler’s socially conscious liners intimate some of the racially centered obstacles that Sleet may have found himself confronted with, but the reasons behind his failure to segue into higher profile standing are just as likely a result of the sheer numbers of his peers already exercising such clout.

Brooklyn Bridge; Secret Love; Softly, As In a Morning Sunrise; Fast Company; But Beautiful; All Members; The Hearing.