Man Overboard: All Hands On Deck 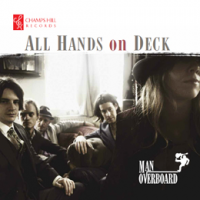 Swing. But which swing? According to London-based quintet Man Overboard, debut album All Hands On Deck is full of "Hot Vintage Swing." According to Duke Ellington, it don't mean a thing if it ain't got that swing. Which begs the crucial question, does Man Overboard have that swing?

Man Overboard (not to be confused with the American pop punk band of the same name) formed in January 2011. It's the brainchild of guitarist Jean Marie Fagon, who moved from Paris to the UK in 1980. Violinist Thomas Gould is classically trained—a heritage that's readily apparent on his intro to "I Found A New Baby." Clarinetist Ewan Bleach and singer Louisa Jones have worked together in a range of outfits from the folkier end of the spectrum including Whiskey Moon Face.

Jones' voice is a wonderous thing. At once plaintive and hard-edged it's a distinctive and engaging sound—Billie Holiday meets Betty Boop? Fagon is happy with the role of rhythm guitarist, for which thanks should be given long and loud. His swinging, bright, chords are at the heart of Man Overboard, keeping the beat and driving the tempos. Bassist Dave O'Brien grabs the chance to create some fluid, melodic lines, secure in the knowledge that Fagon has things covered.

Bob Rothberg and Joseph Mayer's "It Ain't Right," made famous by Stuff Smith, is perhaps the finest example of the Man Overboard sound. It gets its groove from Fagon and O'Brien, Bleach and Gould add two fiercely swinging solos and trade four bar phrases with relish (apparently the clarinetist and violinist were getting extremely competitive during the recording of this track). Jones delivers the lyric with a breathless fervour: so eager to pour out her feelings that she seems to nstart one word before finishing the previous one—Sebastian Scotney of LondonJazz describes it in his sleeve notes as "Northumberland glottal stop." Whatever it is that's being done may not be right but it seems to be doing the trick.

Things calm down for instrumental versions of "On The Sunny Side Of The Street" and "How High The Moon," the band's relaxed approach to both of these classics suggestive of lazy, gin-soaked afternoon parties.

"Lullaby Of The Leaves" and "I'll See You In My Dreams" showcase the band's more romantic side. "St James Infirmary"—let's face it, not the world's greatest party tune—is as downbeat and gloomy as it should be, Bleach's clarinet and the instrumentalists' backing vocals adding to the despair Jones so readily transmits. Even in the midst of this despair the sheer quality of the performances is uplifting.

All Hands On Deck is 18 tracks of pure joy. Hopefully Ellington is sitting somewhere with his own copy, tapping his foot, smiling and thinking "Ah, yes. It's got that swing."

Honeysuckle Rose; That Old Feeling; It Ain't Right; On The Sunny Side Of The Street; I Found A New Baby; All Of Me; Avalon; Lullaby Of The Leaves; Me Myself And I; St James' Infirmary; Hummin' To Myself; Jubilee; Topsy; I'll See You In My Dreams; The Old Man Of The Mountain; How High The Moon; You're A Heavenly Thing; Premier Bal.