Home » Jazz Articles » Brian Patneaude: All Around Us 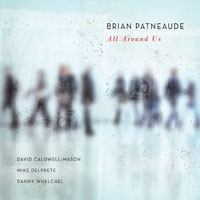 An active part of the jazz scene in New York's Capital District, Brian Patneaude's fifth album shows off his originality and depth as a tenor saxophonist and composer. The six original compositions and two covers on All Around Us were "inspired by people, places and events" in Patneaude's life, adding a personal gravity to the assured musicianship on display.

Listing Michael Brecker, David Sanborn and Hank Mobley among his influences, Patneaude plays with an attractively big, warm tone, more guts than metal. On "Orb," Patneaude's soulful tenor builds dramatically before a pared down statement of the chanting melody closes this heartfelt tribute to Patneaude's friend and drummer, Danny Whelchel. His lines are intricate but never include extraneous notes, best illustrated on the wistful 6/8 memoir "Lake Timeless."

"Too Vast for Malice" alternates a relaxed piano montuno with agitated tenor exclamations to choreograph the struggle between getting angry and letting go, followed by Patneaude blowing brooding descents and punchy exclamations and closing with a solid funk groove. Instead of just shredding on the straight-ahead bop burner "Double Trio," the saxophonist toys with the fleet tempo, hinting at double and half time after the circuitous yet catchy head (that will hopefully make its way into other bands' books).

The up-tempo, upbeat blues "Blucocele" (an ironic reference to Patneaude's mood following dental surgery) closes the disc and sums up its strengths: the ensemble is tight and swinging, Patenaude is subtle but powerful (here with a slightly brassier tone), Caldwell-Mason brings Bill Evans-inspired harmonies into a thoroughly personal concept, and DelPrete offers an infectious finger-popping solo. Upstate New York, Midtown Manhattan or elsewhere, this is an inspired release.