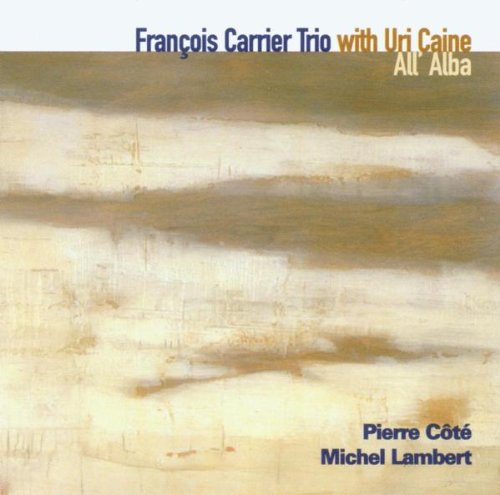 Québécois saxophonist François Carrier cultivates the kind of focused intensity that belies a driving force but does not stray so far out that it loses track of the song form. All' Alba is his fourth studio release, following upon Compassion (Naxos, 2001) with the addition of pianist Uri Caine to his regular trio with bassist Pierre Coté and drummer Michel Lambert. It's a bubbler indeed.

Of the nine pieces on the record, seven are Carrier originals and two are freely improvised. The latter pieces are particularly revealing because they bring to light a distilled improvisational emphasis. "Enfants du Ciel" relies substiantially on Caine's rippling piano underpinnings, which serve as a harmonically static base upon which Carrier can fly free, at least in a relative sense. Critical comparisons will surely run rampant here, but there's no doubt whatsoever that the piece resembles A Love Supreme in its expansive spiritualism. Carrier somehow manages to squeeze the same depth out of the low end of his alto horn.

Elsewhere the Coltrane influence is more than palpable. But Carrier often brings a fresh, popping energy to the proceedings, drawing upon Coté's spiky bass lines and Caine's restless punctuation. Caine himself travels out on an early solo on "Entrance 3," still rippling away, but with a much more harmonically sophisticated bent that's denser and a tad atonal. Carrier starts out with relative restraint but he also takes an opportunity to overblow and burn with fierce energy.

When it comes time to return to structured group interplay, everyone convenes agreeably. And that's the song-like nature of All' Alba. Whatever the voyages into outer sound, the quartet adheres to a head-solos-head form and employs striking melodicism. Perhaps the most versatile and supportive playing comes from the sticks of drummer Michel Lambert, who has a talent for balancing washes of color with (less-than-strict) timekeeping.

All' Alba documents an original voice from the post-Coltrane continuum, a disciplined but creative force that uses composition as a guidepost rather than a predetermined path. The quartet's sophistication belies shared experience and the sympathetic ear of Uri Caine, altogether a fresh combination.