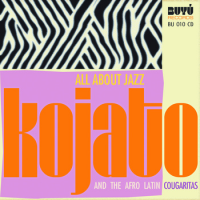 As with any music that is soundly constructed around African rhythms, All About Jazz is impossible to listen to without being captivated by the infectious beats geared for dancing and grooving. Kojato and the Afro Latin Cougaritas have been able to expand upon a distinctive Afro-beat, dancehall, funk, and soul fusion, igniting a cadenced explosion brimming with positive vibrations.

The group is led by vocalist Kojo, who has a hip vocal style resembling Gil Scott-Heron in his intonations and phrasing. Hailing from Monrovia, Liberia he is also entrenched in African swagger and can deliver it with authenticity. The supporting musicians represent an international cast that performs its parts well and the outcome is marvelous. The title track is beatnik poetry interjected with pure funk augmented by layers of keyboards courtesy of André Neundorf. "Everywhere You Go Now, Kuti" is a rousing tribute to the undisputed king of Afro-beat Fela Kuti, accentuated with a precise, horn-driven chorus peppered with percussion. In a sudden turn of direction, "Like A Gypsy" comes complete with a discernible gypsy jazz guitar, while the tempo is brilliantly taken to an accelerated level.

The group drops into a deep dancehall pocket on "Feel Sexy" and slides into "That Kind of Feeling," with suave singer Pat Appleton joining Kojo on vocals for the smoothest track on the record. The Lagos funk numbers "Afro Shigida" and "Funky Man" have an Osibisa-meets-James Brown feel, with some great sax work included in the mix. "Oudo Makasan," "Good Morning Africa" and "Let Loose" intone praises for Africa and the good life, in a multifaceted twist of Afro-beat melded with everything these musicians have in their repertoire.

The festive music on All About Jazz was created with a celebrating, dancing audience in mind; this is what it's all about. In any part of the world where dance is king, in whatever culture, at any place, at any time, this record fits the bill. For the auditory spectators there is much to admire and much to which to adhere, though there might be some adjustments necessary to allow the inevitable swaying induced while enjoying it.