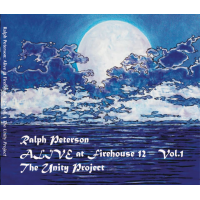 Drummer/composer/bandleader Ralph Peterson has got to be one of the hardest working men in jazz today. He seems to drop a new CD every few months, and the kicker is that the theme and product are markedly different than his previous efforts. In addition, he changes lineups like guys change socks. The band on ALIVE At Firehouse 12 Vol. 1—The Unity Project is not the same one on his previous outing, 2012's The Duality Perspective (Onyx). As a matter of fact, Peterson uses the same instrumental lineup that the late legendary organist Larry Young used on his classic Unity (Blue Note, 1964). However, while Peterson pays homage to one of Newark, NJ's favorite sons, this is hardly a tribute album. Except for a burning rendition of Woody Shaw's classic "The Moontrane" and "Old Folks," all the cuts on this date are Peterson originals.

The set—available only as a digital download but in multiple formats including FLAC an high and low compression MP3—was recorded at the famed New Haven venue Firehouse 12, taking it right out of the gate on the opening "Minor League" with a high-gear solo from organist Jake Sherman, who skillfully plays off the irresistible force of Peterson's attack—which, as usual, kicks off on overdrive. Berkeley tenor man Craig Handy—who doesn't get the press of his homeboys David Murray and Joshua Redman—swings hard from the get-go. The sleeper here, though, is Josh Evans who is one of the most original young voices on trumpet to come down the pike in a long time. He grabs hold of his solo, kicks into fifth gear and doesn't let go until he's finished. "Sonora" follows in a more sedate tempo, with an ever-so-subtle Brazilian motif. The tune is punctuated by Handy's very tasty run on soprano sax; the dynamic saxophonist also swings hard on the next piece, "Second Thoughts."

Even with the superb lineup of his Unity Project, this is undeniably another one of Peterson's high-wire acts. He seems to be the only drummer out there to pick up the mantle of Art Blakey, and he definitely rises to the occasion. On the up-tempo pieces Peterson drives that train, daring the band to hang on. Perhaps it's a good thing that Peterson believes in using young cats, because they need all their energy to keep up with him. The thing, however, is that these boys can hang. Sherman and Evans are two of the most dynamic voices on their respective instruments to break out in a long time. Handy is a pleasure to hear as he takes care of business. As usual, Peterson brings Da Noize in indomitable fashion.