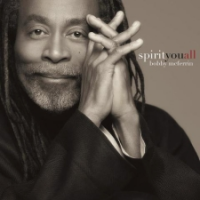 A 10-time Grammy winner, Bobby McFerrin's undeniable gifted voice has not only inspired audiences with its unique qualities but also imbued his spiritual roots as found in songs throughout his discography such as the colorful Garden of Eden expression, "The Garden" from 2010's VOCAbuLarieS (EmArcy) or the unique scriptural vocal rendition of "The 23rd Psalm" from his 1990 release Medicine Music (EMI).

Inspired by the music of his upbringing and his father Robert McFerrin Sr.—an operatic baritone and the first African-American man to sing at the Metropolitan Opera in New York City—Spirityouall is Bobby McFerrin's first release dedicated to spiritual music. It comes with the singer/composer's usual distinctive touches and surprises with a talented studio band performing infectious and familiar songs that combine roots music: jazz, bluegrass and folk music, and some help from singer/bassist Esperanza Spalding on a number of tracks.

One of the many highlights is the touching cover of The Band's 1968 song "I Shall Be Released" written by the iconic singer/songwriter Bob Dylan. The connection becomes clearer why McFerrin included this well recorded jewel, one which was influenced by gospel music whose lyrics tell of a prison inmate who reflects on his sentence and the longing anticipation of his release in the following lyrics:


They say everything can be replaced
Yet every distance is not near
So I remember every face
Of every man who put me here
I see my light come shining
From the west unto the east
Any day now, any day now
I shall be released

McFerrin takes Dylan's insightful piece and tenderly transforms it into a moving reflection of tranquility and faith in spite of the dire setting of the lyrics. His masterful voice is soothing and purposed, carried on a cloud of harmonious background voices and the elongated notes of a pedal guitar. The message is universal—regardless of the type of imprisonment, whether physical or mental, the uplifting sentiment speaks to the idea of hope and release.