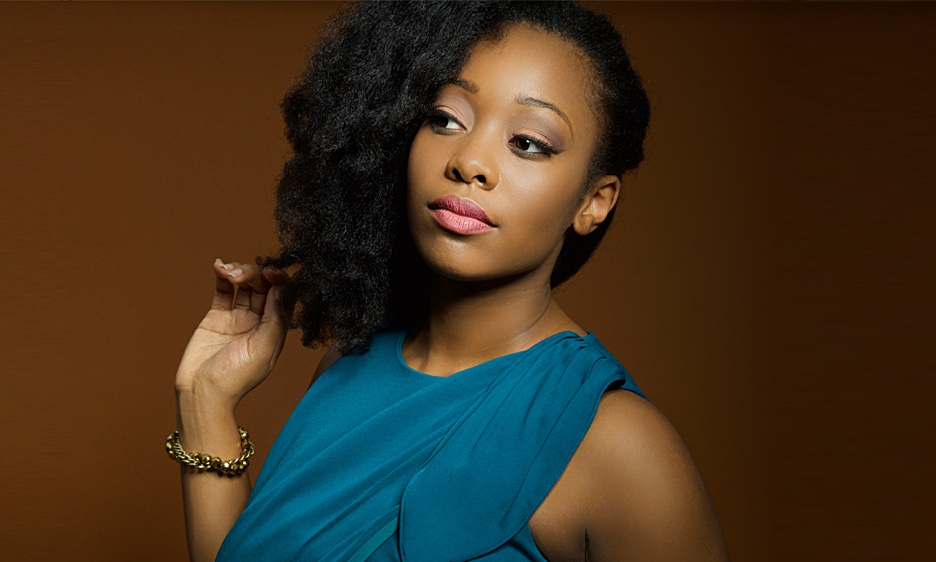 If Alicia Olatuja wasn't a singer, she could probably be a counselor. As it is, she's a counselor to the songs she sings. She develops personal relationships with them. It seems that she spends hours with them on the couch intently listening to them and figuring out what makes them tick. After extensive psychoanalysis, she's ready to present the songs to the world. Knowing their deepest secrets, their phobias, their quirks, their strengths and weaknesses, their favorite colors, lets her wring every last emotional drop from them when she presents them on stage.

Thursday night at Dazzle, she trotted out her patients for a public presentation. Her hours of therapy obviously paid off as the songs opened their souls to the audience, revealing aspects and nuances of their personalities hitherto unknown even to those who thought they were already well acquainted with those tunes. The majority of the patients, er, uh, songs presented by Olatuja were written by others and most appear on her current album Intuition: Songs from the Minds of Women (Resilience Music Alliance, 2018) although a couple were on her previous album, Timeless (World Tune Records, 2014). And, like human patients, all these songs were birthed by women (well, except for that one Michael Jackson song).

The opener was a Brenda Russell composition, "So Good, So Right" which continued ..."to be with you tonight..." Certainly a nice opener to welcome the audience. And, indeed, Olatuja has a personable stage presence. She introduced each song in detail, often describing its personal relevance to her. All this attention to the details of each song shone through in her emotional rendering of each one.

The emotion was backed by a sophisticated technical execution. That is to say, Olatuja can sing. She has the power, the range, the accuracy and precision of a great singer. Her technical chops were honed in the classical context and she's made the jump to the jazz realm with grace. Gospel and soul also figure prominently into her past and present. And she delivers all of it with a wide, inspirational smile. Inspirational indeed; it's hard not to smile watching her perform.

A highlight of the set was her only original of the evening, "Just Wait." The song uses rain as a metaphor in the examination of a romance. As the introduction to the song, she persuaded the audience to snap their fingers, "Not in time, but free snapping," she said. The result was the sound of rainfall, in surround sound. She directed the intensity, starting with a fairly heavy downpour, then diminishing and giving way to clearing skies, only to have the heavens open up once more before the song concluded.

Another highlight was a Joni Mitchell cover, "Cherokee Louise" from one of Mitchell's later albums, Night Ride Home (Geffen, 1991). Although I've listened to Mitchell's version of that song many times, I never picked up on the fact that it's about child abuse. Olatuja explained the subject matter in her introduction and how the song made her uncomfortable, but she felt it was worth a little personal discomfort to shine a light on an area that needed attention.

The closer of the first set was her cover of Tracy Chapman's "Give Me One Reason." The bluesy/funky vehicle suited Olatuja well and she used it as an extensive tour through the band, introducing each player and giving each one an extended solo slot. As befits a talent of Olatuja's degree, her backing band was crackerjack.

The primary soloist for the evening, not surprisingly, was keyboard man Josh Nelson. Nelson is a band leader in his own right and has a long resume of backing singers such as Natalie Cole, Freda Payne and Gaby Moreno. Bassist Benjamin Shepherd held down the bottom all night long and when he stepped out front for his solo on his six string bass it was obvious there was significant horsepower that had only been partially and occasionally tapped throughout the set. Drummer Anthony Fong also held back much of his potential to back Olatuja but took advantage of his brief turn in the spotlight.

Olatuja is still in the early stages of her career. She certainly has the potential for expanding her audience. And there are ample songs out there in the wide world just waiting for a good, thorough psychoanalysis.