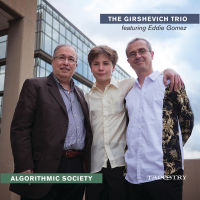 While nearly all of the buzz in the music press about the Girshevich Trio has been about the young age of drummer Aleks Girshevich—who was roughly 12 when this album was recorded, the second of his young life—sooner or later his career will be judged solely by his playing. That's the thing about prodigies—they grow out of it.

And so while Jonny Lang and Monster Mike Welch managed to milk the "young blues phenomenon" for a couple albums, eventually they had to cut it based sheerly on the music: Lang has grown into a full-fledged blues star, while Welch has had more of a journeyman career.

Based on the Girshevich Trio's sophomore release, Algorithmic Society, should he decide to pursue a career in music (and what seems wonderful at 13 doesn't always still seem that way at 18 or 25), Aleks has the chops to hew closer to Lang's arc.

Still, unlike Lang or Welch, the musical focus on Algorithmic Society primarily rests on Aleks' father, Vlad Girshevich, who plays piano and keyboards. And bassist Eddie Gomez gets more solo time than Aleks, as well.

Nevertheless, it is Aleks -along with Gomez—who sets the foundation, and it is an always solid, occasionally brilliant base.

On the outstanding opening track "Healing the Chaos," the trio seamlessly blends Asian and Caribbean rhythms. Afro-Carib polyrhythms are particularly complex, and there have been few truly successful syntheses of Indo forms and jazz, yet the songs comes off as wholly organic—as if this stylistic blend was the most common thing in the world.

After a lengthy solo by Gomez, Aleks lays out a swirling solo behind his father's Arabian figures on piano, incorporating both timbales and a standard trap—the combination seems so natural it is only upon contemplating afterward what they pulled off that the listener is suitably astonished.

On "When We Are Kids," Gomez' bowing lends an elegiac melancholy that counters the innate cheeriness of the theme (which is so compactly upbeat it could have been an unfound manuscript from Peanuts soundtrack composer Vince Guaraldi).

Many of the other seven songs (all tracks are credited to Vlad and Aleks) are somewhat indistinguishable in their melodic structure. The closing title track is an upbeat, frantic number again led by Vlad's muscular piano playing, with a lovely improvised solo by Gomez—singing quietly over this bass a la Bob Magnusson (whose overall bass style he is not far from, either).

Even on the more unremarkable material, the trio's playing is consistently tight -anticipating one another's improvisational impulses, providing complementary support, emphasizing and punctuating.

That Aleks is not yet in high school would not be apparent from his playing—if the publicists hadn't made his age part of the band's marketing campaign, no listener would ever guess from what is heard here.

Healing the Chaos; A Rainbow On Your Carpet; When We Are Kids; 300 Years Ago; A Far Away Place; Three Musketeers; A Song of an Old Time; Unborn Tales; Algorithmic Society.

About The Girshevich Trio