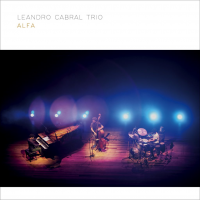 Fans of ECM's trio recordings of the past decade: take note. Alfa is a worthy contender for your collection. Brazilian pianist and composer Leandro Cabral's second leader date is as multilayered and expansive as anything put out by Benedikt Jahnel, Colin Vallon, or Marcin Wasilewski, and has been captured at the peak of fidelity by engineer Adonias Souza Jr. Lovingly performed and recorded at Teatro Alfa, São Paulo, the music produced by Leandro alongside bassist Sidiel Vieira and drummer-percussionist Vitor Cabral is extraordinary. As Professor Silvio Moreira puts it in a liner note for the album, "Leandro Cabral allows the emptiness, the spaces and the silence to conduct ever since the composition of his pieces to their incarnation in the album that arrives." Such attention to space will be familiar to fans of the artists listed above, and Leandro's meticulousness in that regard is dressed to impress from note one.

At the risk of belaboring an ECM comparison, I'd dare to say that Leandro is cut from Keith Jarrett-like cloth, prone as he is to a kindred passion for melody that prompts him to spontaneously vocalize when he can no longer contain it. That said, he is no copycat, as is made obvious by the wealth of original compositions that dominate the set. "O amor que se deu— Vassi n.2," for one, opens with so much lusciousness of sound that one can immediately tell this trio is reaching beyond its triangulation as such into hidden emotional continents. The composing is top-flight as well, and reflects a vibrant mind behind the music that is mature beyond its years. Nothing here is forced, rushed, or compromised.

Leandro pulls a thread of wonderment through each declaration of patience, especially in his solo tracks, "Valsa do amanhã" and "Marcela." Where one is a fading memory, the other is a brooding cling to something more tenacious, but in each the scope of Leandro's talent is clear, as even more in combination with his rhythm section. Be it in the nocturnal sway of "A Dança" (for which vocalist Vanessa Moreno and Cássio Ferreira on soprano sax join as non-invasive guest artists), the cloudless hang-glide of "O grande azul," or the melodically robust title track, the visually minded pianism speaks volumes for all its poetry, and wafts with precise liberation over the woody accords of Sidiel's bassing and Vitor's savory timekeeping. Vitor further shines in an uplifting rendition of Johnny Alf's "Rapaz de bem," which despite its airiness comes into sharp relief through the band's crystalline depth of field. Two Antônio Carlos Jobim tunes round out the set list's three Brazilian standards: "Outra Vez" is ultra-comfortable in its own skin, while "Inútil Paisagem" (If You Never Come to Me) encores with remembrance not of but as romance. Which is what the best jazz ultimately is.