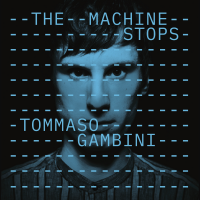 “The Machine Stops”— debut album of guitarist Tommaso Gambini — released on March 25th on Workin Label (IRD distribution). Gambini was inspired by the short story of the same name by english writer Edward Morgan Forster, written in 1909. More then one hundred years ago, the writer envisioned a dystopian future in which humans rely on a universal machine to provide for their needs and to interact with each other, effectively predicting the rise of the Internet and Social Networks. The album contains a suite of original compositions by Gambini, each one based on a particular aspect of the novel; the tracks also includes “spoken” excerpts from the book. For this project Gambini is accompanied by Manuel Schmiedel on piano, Ben Tiberio on double bass, and Adam Arruda on drums. Also appearing on the album are Ben Van Gelder, on alto saxophone, and Dayna Stephens on tenor saxophone. “The Machine Stops” was premiered at the Torino Jazz Festival this May, to critical acclaim. It was also presented at the prestigious Italian Institute of Culture in New York.

All About Jazz musician pages are maintained by musicians, publicists and trusted members like you. Interested? Tell us why you would like to improve the The Machine Stops musician page.