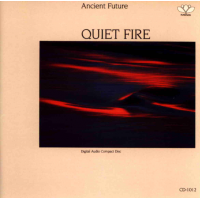 In Memory of Ancient Future Flautist Randy Mead (November 5 1954 – August 5 2012) This third release by Ancient Future is a rich and varied album of contemporary world chamber music in which guest performances by Darol Anger and Alex De Grassi of Windham Hill fame augment the lyrical strains of cello, flute, scalloped fretboard and classical guitars, esraj, tabla, charango, bansuri, and recorder. "If this is new age music, then this movement has something to contribute after all. This contribution's a stunner. If you like an occasional musical bout with Oregon or Andreas Vollenweider, or if you simply believe that music should be beautiful and uplifting and rare, these guys are making your kind of music. And doing it delightfully." – Valley Star, Harlingen,Texas

All About Jazz musician pages are maintained by musicians, publicists and trusted members like you. Interested? Tell us why you would like to improve the Quiet Fire musician page.