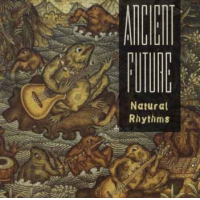 Ancient Future's classic second album was reissued on CD to rave reviews by Philo/Rounder in 1994 to commemorate 15 years of Ancient Future history. The reissue made The Beat magazine's World Music Top 10 of 1994 List (#4). Upon its initial release on LP Natural Rhythms received two 1984 N.A.I.R.D. "Indie" awards in the fields of World Music and Album Cover Design. Making their debut on Natural Rhythms are the remarkable and delightful frogs of Bali, Indonesia, and the Valley of the Moon, California, featured in live improvisations with the members of Ancient Future. A total of 12 different musicians contribute their talents, introducing Balinese gamelan, koto, marimba, and violin to Ancient Future's diverse ensemble. From the poignant, subtle melodies to compelling rhythms, this album is a "milestone in world fusion music." – Genevieve Productions "One of the most intriguing albums you're ever likely to hear. Exceptionally beautiful." – Colorblind James, S. F. Music Calendar

All About Jazz musician pages are maintained by musicians, publicists and trusted members like you. Interested? Tell us why you would like to improve the Natural Rhythms musician page.