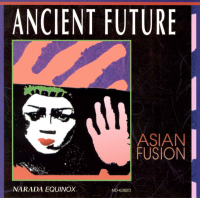 Asian Fusion by Ancient Future is a musical travelogue spanning the vast geographic and cultural expanse of Asia showcasing some of the top performers in the Asian music field, including Zhao Hui, China's preeminent master of the gu zheng (Chinese zither) and Bui Huu Nhut, a leading performer of the Vietnamese dan bau (a one-string Vietnamese instrument with an indigenous version of a whammy bar). Asian Fusion received much critical acclaim. It made the Tower Pulse! Top 10 Best Contemporary Instrumental Releases of 1993 List (#4) and was Guitar Player magazine's "Pick" for April 1994.

All About Jazz musician pages are maintained by musicians, publicists and trusted members like you. Interested? Tell us why you would like to improve the Asian Fusion musician page.