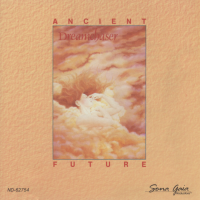 Edge of a Memory; Chant of the C Shell; Andean Dream; Gamarock; So Near, So Far; Promise to the River; Ode to Ajanta.

Dreamchaser by Ancient Future debuted at #2 on the May 1989 Jazziz National Airplay chart. It received a 10 out of 10 rating in CD Review. "This one will sweep you off your feet! Dreamchaser establishes Ancient Future as a world-class music group. A dazzling variety of instruments are heard, from sitars and guitars to violins (acoustic and electric) and keyboards, and percussion instruments from African talking drum to dumbek, gamelan, cymbals and kalimba. This is an exciting album that really moves, and features one cut in the 'spirit of the Andes'." – Heartbeats, Backroads Distribution "Indonesian campus radio listeners picked Gamarock off the Ancient Future album Dreamchaser as the #1 jazz song. Gamarock received 400 points and Edge of a Memory received 125 points out of 2000 points counted weekly for all songs. Trisakti University is the biggest private University in Indonesia and they are critical in jazz and pop songs. When they say they like it....THEY LIKE IT." – Srahreza, Campus Radio DJ, Jakarta, Indonesia

All About Jazz musician pages are maintained by musicians, publicists and trusted members like you. Interested? Tell us why you would like to improve the Dreamchaser musician page.