By Andrey Henkin
October 31, 2004
Sign in to view read count 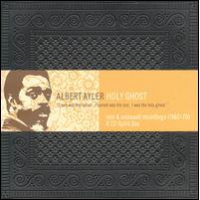 Albert Ayler was a mysterious figure. His recording career was relatively brief, beginning in 1962 and ending in 1970, with several of the entries live performances released many years after his passing. His demise itself was a bizarre circumstance.

Revenant Records, by all accounts the most ambitious and thorough of all box-set minded labels, has now released a nine+ CD set of Ayler whose mystery has rubbed off a little on the project. Its coming was announced by a series of all black ads with little on them but what has become the set's slogan: "'Trane was the Father...Pharoah was the son...I am the Holy Ghost." The result? Most probably the highwater mark in the often underwhelming realm of box sets. It is as if Ayler's body had washed up on the banks of the East River dressed in a natty Armani suit.

The box itself, though black plastic, was recreated from a handcarved original. The outer obi strip doubles as track listing and is marked with the flowers that became the motif for the set (presumably from David Murray's album Flowers for Albert ).

Inside are nine discs of rare and unissued recordings made between 1962 and 1970. Also included are a picture of Ayler with saxophone from his youth; a photostat of a handwritten note from a Copenhagen hotel; a reprinted copy of a Slugs flyer which includes a listing for a week of Ayler's quintet; a reprinted 1965 pamphlet by the late poet Paul Haines entitled Ayler-Peacock-Murray-You and the Night and the Music; a reprinted newsletter from 1969 by Jihad Productions with excerpts about Ayler; a bonus CD of two army band rehearsals from 1960 (in a mini-sleeve that recreates the original reel box); a dried flower from the box motif; and most impressively, a 208-page full-color hardcover book that acts simultaneously as a CD guide, history book, encyclopedia of the era and yearbook. How much would you pay for something like this, not including the Ginsu knife set sure to be offered? Vendors have the price hovering above or below $100, cementing the set as the most affordable and you-get-way-more-than-you-pay-for in history.

For those who question whether Ayler deserves such an ostentatious release when so many other musicians never get this treatment, the answer is twofold. Though the tenor saxophonist always gets his own chapter in any discussion of the avant-garde jazz of the '60s, he is still relatively unknown to most jazz listeners, due mainly to his recorded work up until now being exclusively as a leader. Most listeners get exposed to a musician first from his sideman work; the lack of such material obscures him. The second answer is that the jazz lover who doesn't know Ayler specifically probably knows someone who was influenced by him, either through his deft interpolations of spirituals and marching band styles or his indefatigable, umistakable tone. Though there are many more Miles box sets and they undoubtedly sell better, Ayler is a figure who had such an impact; a box set, even of this magnitude, was inevitable.

It is easy to be bowled over by the impressiveness of the box and forget that there are nine CDs to go through, seven with music recorded either with Ayler as a sideman or as a leader in locales like Helsinki, New York, Copenhagen, Cleveland, Berlin, Rotterdam, Newport and the French countryside. The final two discs contain four interviews with Ayler (from 1964, 1966 and two from 1970) and one with trumpeter Don Cherry less than a year after Ayler's death.

The music runs the gamut of Ayler's various involvements. It begins with three straight ahead interpretations of standards by Ayler with pianist Herbert Katz' Quintet (Helsinki 1962). A 20+ minute blast of the Cecil Taylor Quartet (also 1962) follows featuring the two-horn attack of Ayler and altoist Jimmy Lyons "supported" by Sunny Murray's drums. An Ayler trio (with bassist Gary Peacock and Murray) from the Cellar Café finishes disc one and starts disc two with Spirits and Prophecy material.

The addition of Don Cherry on trumpet for a long 1964 set from Denmark continues disc two. The last piece is a short untitled improvisation from Slugs' in 1966 by Burton Greene's quintet (with drummer Rashied Ali, bassist Steve Tintweiss and the second tenor of Frank Smith, another mysterious saxophonist.)

Discs three and four are Ayler's quintet in two shows from April 1966 in Cleveland. Joining Ayler were his brother Donald on trumpet, violinist Michel Samson, bassist Clyde Shy and drummer Ronald Shannon Jackson. The three sets are a mix of earlier and later material, including songs that would be released later when Ayler switched from ESP to Impulse! Records. The second evening adds the tenor of the Rev. Frank Wright, Ayler's ESP colleague and stylistic foil, for a rare collaboration.

Disc five is two quintet sets, five days apart in November 1966 from Berlin and Rotterdam. Donald Ayler and Michel Samson are holdovers from discs three and four but the new rhythm section is bassist Bill Folwell and drummer Beaver Harris.

Disc six and seven are a mélange from 1967-70, including the infamous performance at Coltrane's funeral, segments with Ayler as part of Pharoah Sander's Ensemble (1968) and his brother's (1969) and the impromptu performance at a French resort after the famed Maeght Fondation performances.

If all this sounds imposing, it is. But the book is an exhaustive reference, containing not only detailed notes on the performances but biographies of the players, interviews, remarks from Ayler's peers, essays, a "Sightings" list that fills out his sparse discography, numerous pictures and reproductions, all that give much needed and deserved illumination to this monolithic and iconoclastic figure.