BY JIM SANTELLA
November 1, 2004
Sign in to view read count 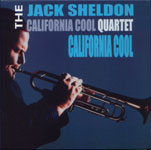 Trumpeter Jack Sheldon, who started out with Wardell Gray and Dexter Gordon, has helped build the West Coast sound in jazz. His early work with Art Pepper, Jimmy Giuffre, Curtis Counce, and Herb Geller helped to knit together a tight circle of musical associates who pioneered the West Coast cool faction in modern jazz. Chet Baker was a close friend. Like Baker and Miles Davis, Sheldon takes great care with the golden tone that he's developed on his instrument. Smooth and velvety, with a superb flexible range, he offers the best with every performance.

Sheldon, who will turn 73 at the end of the month, balances his jazz trumpet artistry with a unique vocal performance that he's developed through six decades of interpreting standards. With California Cool, he balances familiar pieces with fresh originals.

"Sarah" moves slowly and confidently, with the blues oozing out of every bar. Pianist Milcho Leviev hands over a searing solo that summarizes the West Coast sound. Spontaneous, slow, and heartfelt, the mood remains quite personal. Bruce Lett and Nick Martinis supply an exquisite foundation. While this foursome has been together for quite some time, California Cool represents Sheldon's first quartet recording in 17 years.

Two of his other originals, "49 Women" and "Bodega Bay," wrap the blues around sensitive soloing and hearty quartet interplay. Cohesive throughout, the foursome provides an intriguing array. Sheldon's cascading trumpet and sensuous vocals stir the imagination.

The album's title track sums up the quartet's original sound. As Sheldon asserts his penchant for writing interesting lyrics, you're reminded of the many reasons that California's West Coast cool sound took hold. 180 degrees from bebop and tension-filled modern mainstream jazz, the relaxed mood settles in easily. Hot instrumental solos and refreshing lyrics drive "California Cool" passionately, but its demeanor remains outwardly cool and laid back. Highly recommended for all audiences, California Cool stands out as the hallmark of a highly treasured segment of the jazz spectrum.