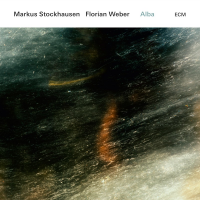 Alba—the first Markus Stockhausen recording for ECM since Karta (ECM, 2000)—is the premiere recording of trumpeter Stockhausen's duo with pianist Florian Weber, a relationship that spun off from Markus' six-piece world music ensemble Eternal Voyage. Initially Stockhausen wrote all of the material, but as the relationship grew Weber contributed tunes: there are also several impromptu performances in this set. After some early experiments with electronics the pair decided that they sounded stronger playing acoustically, making this an all-acoustic album.

Which is not to say they aren't open to a wide range of acoustic sounds. On "What Can I Do For You?" Weber begins the album on the inside of the piano, a gentle wash of sound that prepares the way for Markus' entry on muted flugelhorn. Stockhausen's gently swinging, melodic composition "Mondtraum" follows. Stockhausen always begins the first recording session with intuitive improvisation, or "intuitive music" (a term coined by his father, the pioneering composer Karlheinz Stockhausen). As there was no musical pre-agreement, most jazz musicians would simply call it "free improvisation." Regardless of the label, "Ishta" is the luminous result.

There are several other impromptu performances. For "Resonances" Stockhausen blew phrases into the body of the piano, creating a kind of duet (presumably with the damper pedal raised). The album's three brief piano pieces—"Possibility I," "Today," and "Barycenter"—were also impromptu performances by Weber. While there is no clear division between composition and improvisation, there are tracks with a more composed sound. In addition to "Mondtraum," recent Stockhausen commissions are represented by "Synergy Melody" and "Zephir." Weber's "Die weise Zauberin" also has a clear song structure.

Composed or improvised, the duo produces a beautiful, introspective sound. It joins A Cosmic Rhythm With Each Stroke (ECM, 2016) by pianist Vijay Iyer and trumpeter Wadada Leo Smith as a recent shining example of a trumpet and piano duet recording.