Hiroe Sekine: After The Rainfall 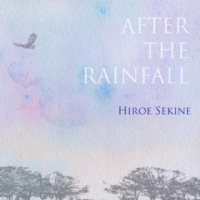 Pianist Hiroe Sekine's graceful touch and pleasant musical disposition are apparent from the first downbeat on After The Rainfall, but they don't make this an underwhelming affair. The record certainly has its share of gentle aural pleasantries, but that isn't the end of the story. Fusion-laced revisions of Thelonious Monk, swinging, up-tempo blues, and Brazilian getaways are also part of the package.

Sekine retained the producing services of Russell Ferrante of the Yellowjackets. He also oversaw the work on her debut, A-mé (Sekai Music, 2010), but moves away from its horn-heavy format here. Much of the music on After The Rainfall is notable for light as a feather yet lively and buoyant rhythm section work, making this both moving music, and music that moves. West Coast studio stalwarts all, drummer Peter Erskine, guitarist Larry Koonse and bassists Darek Oles and Jimmy Johnson underscore this music with conviction and clarity as they follow the course that Sekine has laid before them.

Sekine sets sail with an odd-metered, whimsical journey, "Song Of The Owl," that features Bob Sheppard's soprano saxophone work. Sekine's wordless vocals serve as a soothing balm for the soul on the understated title track. A reharmonized "In My Life" pairs her easy-on-the-ears voice with that of singer Arnold McCuller, and also gives some solo space to Oles, while Chick Corea's "Windows" puts Sheppard back in the spotlight. The center of the album features back-to-back Brazilian beauties that are notable for different reasons. Sheppard's flighty flute is in play on Toninho Horta's "Aqui O," while a slow-as-can-be bossa nova-derived groove moves beneath Sekine's sweet, whispery vocals on Antonio Carlos Jobim's "Inutil Paisagem."

Sekine takes off the kid gloves for the three selections that close out the album—the most energetic and entertaining tracks here. "So, But, Anyway," which opens with Johnson's electric bass solo and features keyboardist Sekine, uses modern, angular melodic architecture in its design. "Spoon Key" is a swinging, up-tempo blowing tune built around the blues, while Monk's "Evidence" is reborn as a fractured, fusion-tinged feast.

On After The Rainfall, Sekine finds balance between the breezy and the bold as she establishes herself as a talented composer, pianist, vocalist and arranger.

Song Of The Owl; After The Rainfall; In My Life; Windows; Aqui O; Inutil Paisagem; So, But, Anyway; Spoon Key; Evidence.