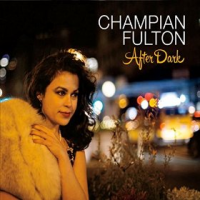 Veteran New York pianist and vocalist Champian Fulton offers another recording of time-honored standards on After Dark, except this particular effort focuses on the music of the Queen of the Blues, the music of the great Dinah Washington, who was her first major vocalist influence early on in her life. Though she grew up listening to Sarah Vaughan, Billie Holiday and Helen Humes among others, it was the sound of Dinah's voice that left the biggest impression and this album, is her tribute, her musical tip of the hat to her childhood idol. Her goal, to produce a recording that makes one smile and feel good which this album, certainly does, her recommendation, to listen to it After Dark.

On tap here, are songs from the past by great American songwriters such as Irving Berlin, Fats Waller, Sammy Fain, Johnny Mercer and others. The only original on the eleven-song program, is an instrumental piece featuring Ms. Fulton on a splendid piano solo performance on the album's finale "Midnight Stroll." Presenting the music is a formidable quartet led by the pianist that includes Fulton's father, trumpeter and educator Stephen Fulton. The other half of the band is comprised of jazz luminaries' drummer Lewis Nash and bassist David Williams.

The 1929 jazz standard by Waller and Harry Brooks, "Ain't Misbehavin' "starts the program off followed by the Fain classic "That Old Feeling," coming off in swinging fashion as Fulton and the band play it straight and furious with nice chops on the piano by the leader demonstrating her prowess on the instrument as well as strong bass line work by Williams. Originally penned in Spanish by Mexican songwriter Maria Grever, "What a Difference a Day Made" was popularized by Washington and is performed here in a sweet and sensuous style made so by the pianist's sultry vocals.

The Berlin classic "Blue Skies" has some significance to both the pianist and her father, one of Washington's most popular oft-recorded songs from 1954, the late great trumpeter Clark Terry, performed on the horn at the time and this time, dad Stephen—long-time Terry protégé—plays the song on the flugelhorn as his daughter does her best interpretation of her idol. "A Bad Case of the Blues" was one of the reason's Washington was referred to as the Queen of the genre and here, Fulton sings the standard with a lot of soul.

Noel Coward's slow, down tempo "Mad About the Boy," gets a delicious treatment here with the vocalists' sensuous approach the reason why while, the oft-recorded 1931 song by Gerald Marks and Seymour Simons, "All of Me," an eternal swinger, does not lose any of its luster here as Fulton sings it beautifully as well as delivering a solid solo on the keys for one of the keepers of the set. An album worth spinning anytime of the day, Champian Fulton's After Dark is a warm and beautiful homage to Dinah Washington containing more than its share of wonderful moments.

Ain't Misbehavin'; That Old Feeling; What a Difference a Day Made; Blue Skies; Keepin' Out of Mischief Now; A Bad Case of the Blues; Travelin' Light; Mad About the Boy; All of Me; Baby Won't You Please Come Home; Midnight Stroll.