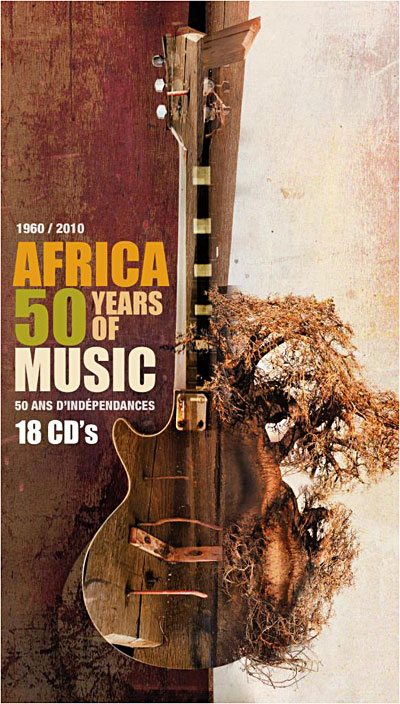 "In my country alone, there are 80 ethnic groups and 200 dialects," says the Cameroonian saxophonist Manu Dibango in an interview in the booklet enclosed with this box set. "So it's hard to talk about Cameroonian music in the singular. There are thousands of types of African music."

To provide a fully comprehensive survey of African music is, indeed, beyond the practical scope of any box set. That said, the monumental 18-disc anthology Africa: 50 Years of Music: 50 Years of Independence is, by several light years, the most exhaustive and erudite collection yet to have been produced, covering the majority of the main modern styles and a fair number of their tributaries.

This is also, as it needs to be, by far the biggest collection to have been compiled, and the numbers are impressive. 18 CDs, three each from West, Southern, East, Central, North and Lusophone (Portugese speaking) Africa. 185 tracks by 183 artists (Guinea Bisseau's Super Mama Djombo and Congo's Grand Kalle each get two tracks), mostly recorded between 1960-2009. 16 hours 20 minutes of music drawn from 38 countries: a treasure trove of landmark hits and important but more obscure recordings, which comes with a lavishly illustrated 76 page booklet, half in English, half in French, including photos, original sleeves, specially commissioned artwork and essays.

The concept behind the collection is to include only recordings made in any country after it gained independence from colonial rule. So the tracks from Egypt, the first African country to become independent in the 20th century, go back the furthest, including three from the 1940s. South Africa, on the other hand, although it became nominally independent in 1961, only gained independence from white rule with the overthrow of apartheid, and so only three, scene-setting tracks from the musically fertile 1960s and 1970s are included (singers Letta Mbulu and Myriam Makeba's "Welele" and "Pata Pata" and pianist Abdullah Ibrahim's "Liberation Dance").

Within these parameters, Africa: 50 Years of Music: 50 Years of Independence aims to include a representative sampling of each region's music from its various, immediate post-independence years up to the late 2000s; in most cases, the three discs devoted to each region progress in chronological order. It would make for tedious reading to offer even a representative sample of the 185 tracks here, and picking out "highlights" is impossible—there isn't a single dud on the entire 18 disc collection—but the complete track listing is given at the end of this review. Read it and marvel; listen and be transported.

Inevitably, even with a project as big and as deep as this one, a few personal-favourite artists and styles are likely to be missing, along with a few objectively important ones. The West Africa discs, for instance, despite an average playing time of 75 minutes each, don't include any of the Nigerian juju music popularised in Europe and the US by artists such as King Sunny Ade and Ebenezer Obey in the 1980s.

But this is more than compensated for by the inclusion of tracks—and most particularly, countries—which may be unfamiliar to an individual listener. The North Africa discs, for instance, are likely to provide revelatory moments for many followers of African music, whose listening habits tend to favor sub-Saharan countries. Take the Paris-based, Algerian singer Rachid Taha, one of the handful of North African artists to have made a big impact in the wider world during the 2000s. One of the highlights of Taha's mesmerizing Diwan 2 (Wrasse Records, 2007) was his cover of the iconic singer Dahmane El Harrachi's "Kifache Rah." Africa: 50 Years of Music: 50 Years of Independence includes Harrachi's original 1960s recording of the tune. (And boy, does Taha owe a lot to it).

Other listeners may find the East Africa or Lusophone Africa discs as ear-opening. The Ethiopian vibraphonist and bandleader Mulatu Astatke, the father of Ethio-jazz, has recently done much to kindle interest in East Africa, while the Cape Verdean singer Mayra Andrade has built on the Lusophone breakthrough made 20 years ago by the singer Cesaria Evora. But both regions are still off the radar of many African music fans. Atatke and Evora are included in the collection, along with the singer Mahmoud Ahmed, whose "Ere Mela Mela," originally released in 1975, was the tune which announced the arrival of Ethiopia on the world stage when it was reissued by Belgium's Crammed Discs in 1986. "Ere Mela Mela" is one of 11 Ethopian tracks included on the East Africa discs. Kenya and Tanzania are also well represented and there's a solitary gem from Sudan in Abdel Galir Salim's "Sudani" from 1991. The Lusophone Africa discs join up the dots between Evora and Andrade with half a dozen other wonderful singers.

The collection also provides the opportunity for a little historical revisionism. The British-based, Afro-rock band Osibisa, for instance, should clearly be rated as a giant which peaked before its time. "Music For Gong Gong," here in a thrilling eight-minute live version from 1971 complete with a magnificent extended tenor saxophone solo from Teddy Osei, is irrefutable evidence that the band deserves a better shake than most of the histories have given it.

And so the fascination continues; one familiar hit and one revelation following another throughout the 18 glittering discs. Despite some sloppiness with the liner note editing, the box's only drawback, Africa: 50 Years of Music: 50 Years of Independence is the mark by which future African music collections will measured, and it has set the bar very high indeed.