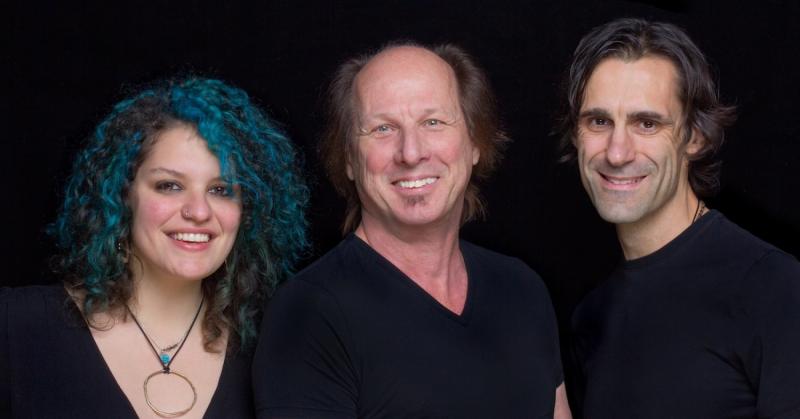 Like so much of life, music is really a work in progress that never stops changing. Adrian Belew has always been one to live by the idea rather than follow it—he's best known for an extended tenure in the always-inventive King Crimson, spins smart and often convoluted songs that still grab the ears effortlessly, and can wring sounds out of a guitar that nature never imagined. It all makes for an unclassifiable mix of power pop, progressive-rock sophistication and fun experimental noise. With the exuberance of teenagers and a crowd devoted enough to shout for "Frame by Frame" after a three-note tease, his aptly-named Power Trio handily blew the roof off the place, leaving everyone happily dazed and completely thrilled.

With Julie Slick slinging her booming five-string bass at stage right and Tobias Ralph battering the skins like mad, the band's interplay was explosive. The three could barely stop laughing all night long while goading each other with musical fake-outs and constantly surprising improvisations. Belew acted practically giddy, whether shredding blizzards of fuzz-toned notes or making his custom Parker Fly sound like a laser beam or growling animal. For their part, the rhythm team added enough flourishes and unison fills to fill a textbook. Their working relationships with the leader (Ralph for six years, Slick going on eleven) have honed their collective musical telepathy into something uncanny.

Belew's conception of ever-changing music manifested in 2015 in an app called Flux ("music that is never the same twice"), which randomly mixes and matches pieces from an extensive, amorphous library of his material. Of course that approach can't be completely duplicated with a live band that needs to follow cues together, so these two sets were arranged to sound like a shuffle instead. Some songs were basically performed in full, while others got abridged or mashed up in weird and interesting ways. A verse and chorus of 1982's "Heartbeat" abruptly switched on a dime to the ending solo of "Writing on the Wall" from 2005. Others took it from the middle part onward, got sandwiched in medleys, or only appeared for as little as half a minute. Several finger-twistingly intricate pieces of the intense suite e (Self Produced, 2009) were scattered among Crimson classics and catchy solo staples dating back to "Big Electric Cat" or "Men in Helicopters."

The trio tore through all this high-voltage material with equal parts power and precision. The packed room only got more and more delighted, which only spurred the players to give even more. It's a complex set of wickedly tricky music to get right, but the results are simply staggering when it all comes together—and experiencing this band's level of musicianship, chemistry and sheer unadulterated joy was a rare thing indeed.