Michael Bates: Acrobat: Music For, And By, Dimitri Shostakovich 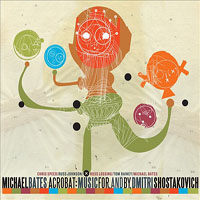 To set the record straight: America has not taken a step closer to being more tolerant of any kind of musical rebel. It does not tolerate the one that conforms (for he or she too is a rebel), nor does it tolerate the one who is the objector. Like in every other aspect of life—other than art—America finds the staid and middle of the road and one most likely to sell the most records most acceptable. Dimitri Shostakovich was anything but that kind of artist. His was an art where emotional extremes collided, successfully juxtaposing tragic intensity with surreal wit. In his compositions, the sublime converged with the banal and folksy jauntiness came together with elemental darkness in the grand manner of Gustav Mahler, whose music Shostakovich greatly admired. It is exactly this aspect of his music that confounded the musical establishment of Soviet Russia; and because he survived there by toeing the party line, he was also unwelcome in the US. However that seems to have changed since the composer's death in 1975.

It seems, though, that the character of one of the 20th Century's greatest composers was made for a new life in jazz; at least this is what is posited by the extraordinary bassist Michael Bates on Acrobat: Music For, And By, Dimitri Shostakovich. Actually, the composer was celebrated by Keith Jarrett with a legendary recording Dimitri Shostakovich: 24 Preludes and Fugues Op.87. (ECM New Series, 1992). In that recording Jarrett took what is probably the second most famous section in Shostakovich's oeuvre and interpreted them in his stately manner. Bates, however takes inspiration from the entire Shostakovich book and re-imagines it. So there are hints from Shostakovich's music for small ensembles as well as his sweeping symphonic work. And everywhere there is evidence that the bassist understands the essence of the Russian's style, one that combines the three strands of "high-spirited humor, introspective meditation and declamatory grandeur," as espoused by the ethnomusicologist, Boris Schwarz.

The spectacular manner in which Bates captures this is particularly noteworthy in his classic re-imagination of "Dance of Death," where both the beauty and grotesqueness of life becomes a spectacular musical reality. The music composer Shostakovich will always be open to greater scrutiny as interpretations may go one way or the other. However, Bates has pierced the skin of the great composer with such precision and extracted his essence with what can only be described as musical forensics. Then, with ingenious use of instrumentation he has recreated the proverbial sonic assault of Shostakovich in a truly inspired manner. Inspiration comes in the form of instrumentation, and chief among these is clarinetist Chris Speed, who animates characters and situations with a majesty all his own. There is also keyboardist Russ Lossing's Fender Rhodes, which has not been played with so much creativity and ingenuity since Chick Corea employed it in his seminal electric ensembles decades ago. And finally there is Bates, who masterminds everything with sheer genius.