By Doug Collette
November 24, 2018
Sign in to view read count 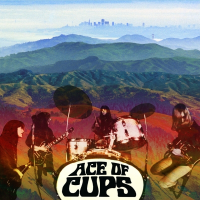 There's a solid Ace of Cups album within the twenty-one plus tracks on this set. Never having released a studio work in the fifty-one years since the group made a name for itself in San Francisco's Haight-Ashbury, it only stands to reason AOC would be sorely tempted to make a statement for its debut, particularly in this year of abiding female empowerment. But the sprawling nature of this work, like many such expansive pieces, suggests these groundbreaking females, along with multi-instrumentalist and producer Dan Shea, might've more judiciously edited their prolific output.

Four of the original quintet, Denise Kaufman, Diane Vitalich, Mary Simpson and Mary Gannon appear on what is a valiant effort to make up for lost time. There's no question how firmly they espouse independence on "Fantasy 1 & 4" and they sound downright insouciant during "Stones." Yet both lead and background vocals sound tentative on "Feel Good," nearly as stilted as the sentiment expressed in the song. Meanwhile, even as the musicianship rises above a rudimentary level of expertise on "Pretty Boy," such performances nevertheless reaffirm the necessity of guests to create the semblance of a full band.

But peppering the LP with contributions by famous names, including Jorma Kaukonen, Jack Casady, and blues harpist Charlie Musselwhite, somewhat gives the lie to the implicit self-reliance in Ace of Cups' reunion. Only a few cuts like "Circles" are sufficiently well-wrought to integrate guests who do not overshadow the foursome: the Grateful Dead's Bob Weir, for instance, takes over on "The Well," while Taj Mahal dominates "Life In Your Hands" and "Interlude: Daydreamin.'" In contrast, carefully-picked acoustic guitars contrast with washes of organ on "We Can't Go Back Again" to create some arresting moments all too rare on this record.

The group might've listened to themselves more closely on that latter song. Yet as this sequence of tracks progresses through "Taste of One," Ace of Cups does evince increasing confidence: billowing harmonies on "Feel It in the Air" effectively evoke their bygone era. But like the enclosed booklet's many photos of the principals 'back in the day,' the various "Interludes," alternately sound effects and strings, seem strained acknowledgment of times past, token affectations rather than wholly pertinent production touches. The orchestration on "Indian Summer" adds evocative atmosphere though and the shifting time changes with "Medley ("The Hermit/"The Flame Still Burns"/"Gold and Green"/"Living in the Country") constitute ambitious, well executed progression of rock, reel and raga.

Perhaps with that penultimate interval as its focal point, Ace of Cups might better have compared favorably to the hallowed debuts of some of their peers (The Doors and Jimi Hendrix). Instead, this effort, at its heart, is the more customary starting point of a fledgling band, a foundation of some stability upon which to build for the future.

CD 1: Introduction: There’s a Record Being Made; Feel Good; Pretty Boy; Fantasy 1&4; Circles; We Can’t Go Back Again; The Well; Taste of One; Mama’s Love; Simplicity; Feel It in the Air. CD 2: Interlude: Transistor; Stones; Interlude: Baby from the Forest of Knolls; Life in Your Hands; Macushla/Thelina; As the Rain; Daydreamin’; On the Road; Pepper in the Pot; Interlude: Breath; Indian Summer; Grandma’s Hands; Medley (The Hermit / The Flame Still Burns / Gold & Green / Living In The Country); Outroduction: It’s Always Safe; Music.

About Ace of Cups