By Jeff Stockton
January 15, 2010
Sign in to view read count 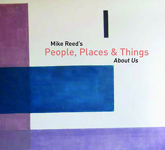 Mike Reed's People, Places & Things was conceived as a band dedicated to reviving and expanding on aspects of the Chicago jazz scene of the late 1950s, bringing a fresh approach and contemporary ideas to the music of that era. About Us continues in that vein, but as the title states, its focus is more on the band itself. Although led by a drummer, this piano-less quartet puts the dynamics in the hands of saxophonists Tim Haldeman (tenor) and Greg Ward (alto).

The tunes generally start with a stated melody and when the saxophones come in they push themselves (and each other) to the limits, straining to reach the next note, struggling and striving to go on the next run. On "It's Enough," it's Haldeman's rough-hewn tenor that does the heavy lifting. On "V.S. #1," the tune ebbs and flows with the momentum of Ward's alto. On "Flat Companion" and the title track, alto and tenor interlace and throw shadows that define the dynamism and excitement pervasive in these compositions.

Reed's concept goes one step further here through the inclusion of three of Chicago's leading improvisers: trombonist Jeb Bishop (former member of theVandermark 5), guitarist Jeff Parker (Tortoise) and tenor man David Boykin (Nicole Mitchell's Black Unstoppable). Each of these players contributes his own composition and brings his individual sound to the record. On Bishop's "Big Stubby," trombone and bass (Jason Roebke) duet before the band joins in, while Parker's "Days Fly By (with Ruby)" carries forward with sharp-edged syncopation. As for Boykin, his swaggering lead on "Big and Fine" links him directly to Chicago's brawny tenor legacy, the track building languorously then growing kinetic in the triple-threat interplay among the saxophones.

Boykin is criminally unknown and under-documented. His presence alone makes About Us a must-have. A third disc is planned in this series of Chicago-related music and Reed's People Places & Things is shaping up to be one of the top working bands around.

It's Enough; V.S.#1; About Us; Big and Fine; The Next Time You Are Near; Big Stubby; Flat Companion; First Reading: Paul's Letter; Under the Influence of Lunar Objects; Days Fly By (with Ruby).