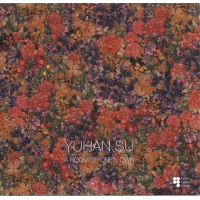 Continuity and progress are the watchwords for A Room of One's Own (Inner Circle Music, 2015), Yuhan Su's follow-up to Flying Alone (Inner Circle Music, 2013), her impressive debut for Greg Osby's label. New York-based Taiwanese vibraphonist Su's debut announced a melodic composer of nuance and sensitivity and a soloist of some style. A Room of One's Own bears all the same hallmarks -well-defined tunes, elegant, tightly woven compositional frameworks and fine individual showings. Yet here, Su is working with an entirely different set of musicians to those on Flying Alone, which no doubt contributes significantly to the fresh ensemble sound. Su has jettisoned saxophones and piano, and in their place trumpeter/flugelhornist Matt Holman plays a leading role.

On the opening track "Amulet," Holman and Su glide in and out of each other's orbit like skaters, coupling briefly to flirt with unison lines before peeling off on closely parallel, yet independent courses. Though the ensemble lines drawn by Su's pen are tight, her musicians are left space in abundance for flashes of individual color and personal narrative. This elastic approach is keenly felt on "Valedicere," an impressive three-part suite of gradually shifting emotional contours: Su and guitarist Kenji Herbert provide atmospheric support to the solo explorations of bassist Petros Klampanis Holman on the melodious "Valedicere I"; Su is at the heart of "Valedicere ii," her flowing solo underpinned by Nathan Ellman-Bell's urgent, restlessly probing rhythms; the ensemble treads balladic terrain on the plaintive "Valedicere iii," a beguiling tune steered by Holman, but one whose ambiance is very much the construct of the quintet as a whole.

Su's wordless singing lends a more overtly personal touch to "No. 13 Waltz," a vignette inspired by Taiwanese kinetic artist Shyu Ruey Shiann's work River of Childhood, which floats with a lullaby-esque delicacy. The two-part "I Do Not Always Understand What You Say, What Is, Is by Its Nature on Display" also features wordless vocal—from Su and Herbert—though its Holman's piercing trumpet and Ellman-Bell's driving rhythms that dominate Movement i; by contrast, the spare architecture and slower tempo of Movement ii makes the late surge towards the climax all the more powerful. Su's deft manipulation of dynamics throughout the CD imbues the music with constantly engaging narrative momentum.

The impressionist malletkat/drum duet "Painter's Mind" sees Su conjure soaring synthesizer-like textures from her MIDI instrument, while Ellman-Bell's rhythmic patterns become gradually more probing in response to Su's path. The tune marks a bold departure from the rest of the music and a potentially fascinating area for the vibraphonist to further explore. The lively "Freezing Point" sees Yu in supporting role as Holman, Herbert and Klampanis stretch out in turn. The atypically balladry of "Anti-hunger Song" is defined by Su's gently coursing lyricism, over a bed of spare bass, feathery brushes and whispering guitar.

Just two recordings into her career to date, Su already commands attention, not just as a rising star on her instrument, but as a mature composer, and significantly, as a leader who embraces the supporting talent that illuminates her music. On the evidence so far, the next chapter in Su's story promises further rewards and perhaps greater surprises.