A Quarry Concert in Italy 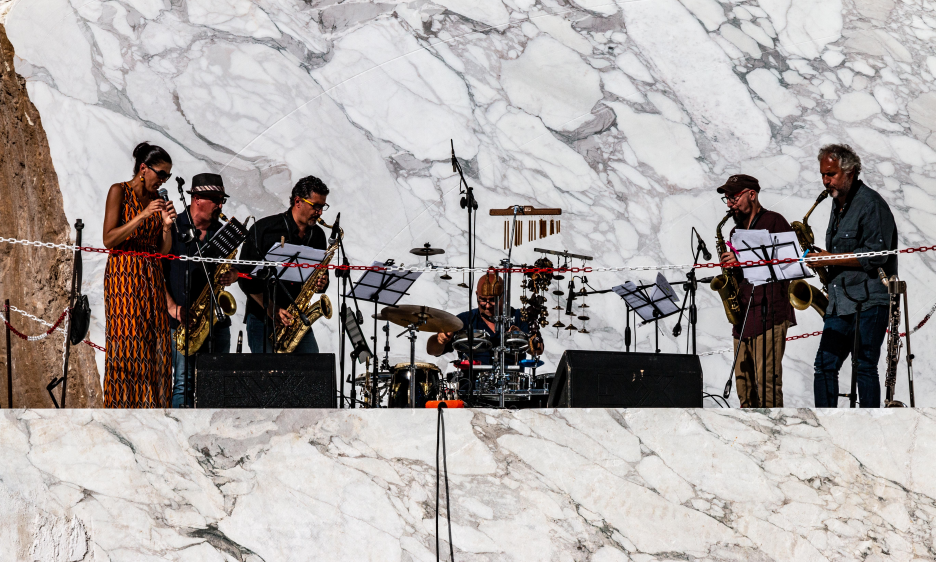 BY FRANCESCO MARTINELLI
August 8, 2019
Sign in to view read count

The music of Hermeto Pascoal in the unique setting of a marble quarry.

Summer in Tuscany is full of concerts in interesting, sometimes unique places. In fact, a variety of acoustic musics like jazz, chamber and folk have proven an invaluable tool to revitalize historical buildings, ruined chapels, man-made marvels of architecture. More complex and nuanced is the relationship with nature. A lake, a park, a wooded mountain can be a suggestive location, but how much this human activity—including transportation, waste, and noise—impacts the natural environment that we want—nay, need—to preserve?

Certainly stone quarries have a visible, hard impact on the landscape. The Earth looks wounded, the profile of mountains changed. But at the same time these are the sources of the severe granite of the Tuscan streets, as well as of the resplendent marbles of our cathedrals. No-one questions the quarry while admiring the Leaning Tower in Pisa or Michelangelo's David. Tuscany still produces some of the most sought after marble, mostly destined to embellish mosques in oil-rich countries, and modern temples of finance. Behind the ancient masterpieces and today's luxury there's always been the hard work of the "cavatori," the people who for centuries excavated marbles in a low-paid, dangerous and strenuous work. The dead and the maimed are innumerable, and forgotten; the lucky ones lived lives cut short by the omnipresent dust, affecting eyes, skin and lungs. Of course today's tools are more powerful and safe—but the quarry environment has changed little. The cut mountain, the hard work, the fighting embrace between nature and man make for a dramatic view, and increasingly painters, photographers and performers focused on the subject. Meanwhile the debate rages: here's not the place to discuss pros and cons, only to express hope that these time-honored activities, the livelihood of communities for centuries, will be regulated in order to minimize environmental impact.

Vagli is a tiny village tucked in the North of Tuscany, famous for its artificial lake where an ancient church comes to light periodically when the reservoir is emptied for maintenance. It also boasts a quarry of one of the most requested marbles, the Calacatta, its white decorated by black arabesques that make for astounding decorations when cut and mounted specularly. The current excavation was paused to allow the annual cultural and social event organized by the local firm Cooperativa Apuana, who owns and operates the quarry. Proposed by local jazz drummer Piero Orsi, the event featured a band led by baritone saxophonist, bass clarinetist and composer Rossano Emili, who moved in the nearby city of Barga where he's a mainstay of the Barga Jazz Big Band. Emili's latest band is the quaintly named Fat Fingers Saxophone Quartet, including Alessandro Rizzardi, Moraldo Marcheschi e Renzo Telloli besides the leader; the quartet for this project was augmented by vocalist Federica Gennai and dummer/percussionist Andrea Pacini— remarkably, all six musicians from the province of Lucca.

Called Hermetica, the band plays Emili's arrangements of Hermeto Pascoal's music. Pascoal—to refresh our memories—is the composer from the Brazilian Northeast who was invited by Miles Davis in 1969 to play in Live/Evil, who was called by Gil Evans "the greatest arranger of the XX Century" and tutored Milton Nascimento and Airto Moreira, but who for Brazilians is simply "o bruxo," the magician. Hermeto shares several traits with Emili himself. For both there are no genre boundaries in the music: the repertory of the Fat Fingers Sax Quartet includes Ellington, Monk, Mexican songs and Bartok —as long as the music rings true. Pascoal is not a classical, popular or jazz composer: he lives and breathes music, his melodic invention flows like his beloved rivers, and the colors and rhythms of his arrangements include all the palette of Brazilian music—an universe which way too often is represented outside of Brazil by bossanova only (in fact Hermeto might be considered to have been an inspiration for a return to the full spectrum of Brazilian music after the bossanova fashion of the '60s). And if Hermeto is often overlooked, Emili's talents might be the best hidden secrets of Italian jazz, one that it was impossible to quarry yet. It takes the persistence of a miner to find him—no social network presence, rare (or none) solo recordings, but his baritone voice is very sought after in Italy both for unfailing rhythmic support and inventive solos, and he's an appreciated Conservatory teacher.

Rossano Emili took to Pascoal's music like a fish to water. His arrangements showcase the cantability and complexity of Hermeto's compositions, shifting from accurately designed contrapuntal lines to furious collective improvisation, again in full respect of the composer's original intention. The program included many of Hermeto's well-known tunes: "Bebe," the solo opening his seminal La Musica Libre de Hermeto Pascoal album; "Ginga Carioca," in the capoeira rhythm; "Nem Um Talvez," the gorgeous ballad recorded with Miles; "Suso" and "Suíte Norte, Sul, Leste, Oeste" from his very jazzy/experimental album Zabumbê-bum-á from 1979—Hermeto seemed totally oblivious of the electric fusionist tendencies and went decidedly his own way in the 70s and 80s. Emili created independent, polyphonic parts for the voice, using it almost purely as instrumental voice, like Hermeto in the last mentioned piece, and asked the percussionist to carefully recreate a complex world of rhythm.

The concert took place in the late afternoon, under a scorching sun, multiplied by the the white walls of marble around the stage—which was itself a huge slab of marble just sliced off the mountain. It made for some spectacular visuals, but the musicians have to be commended for having navigated the hugely difficult scores—nothing is obvious or banal in the music of Pascoal—in such difficult environmental conditions. Vocalist Gennai navigated brilliantly the almost impossible lines, percussionist Andrea Pacini used all the available timbral and rhythmic resources connecting the pieces with improvised solos, and the reeds—alternating saxophones and clarinets—fought valiantly against the heat delivering an impassioned performance.

The audience—delivered to the concert location with 4x4 pickups from a parking downhill—was an interesting mixture of quarry pensioners, rather oblivious to the music and more interested in loudly discussing retirement issues; locals and international visitors—Vagli due to its marble is a center of visits by artists and buyers both. The reactions were generally positive due to the unmistakable commitment from the musicians, whose hard work for the day revealed an affinity with the quarry life—and after all, didn't the Quarrymen earn a place in the history of music?