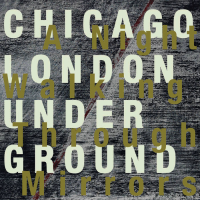 Rob Mazurek (cornet, sampler & electronics) and Chad Taylor (drums, mbira & electronics) represent the Chicago delegation, aligning within Londoners Alexander Hawkins (piano) and John Edwards (bass) for a meeting of the experimental jazz minds on this exuberant live set. Hence, these prominent improvisers and progressive jazz laureates execute a surfeit of soul-jarring motifs, spiced with off-center EFX articulations and fractured segments amid a horde of protracted developments and synergistic improv. Other than Mazurek's Sao Paulo Underground and Exploding Star Orchestra, he partners with Taylor in the Chicago Underground Duo. Whereas, Hawkins and Edwards are in the thick of things in Europe, performing with the crème de la crème of like-minded artists. Here, the musicians' operate within multifarious frameworks much to the delight of the revved-up audience at the Café OTO club in London.

"Mysteries of Emanating Light" is the final piece that clocks in at nearly 19-minutes, launched by Taylor's polyrhythmic assault and followed by the band's asymmetrical gala. Simply stated, they enact a blood-curdling episode via sheets of sound and shifting mini-motifs along with an oscillating sequence of highs and lows. Indeed, there are no monolithic activities as Taylor also uses his mbira, coupled with Mazurek's darting synth lines and plaintive cries on cornet. There are many counterbalancing tonal swashes along with Edwards' creaky arco notes and a few interweaving firestorms, as Hawkins plants an additional rhythmic aspect with his pressure-cooker attack and pulsating block chords. Mazurek seemingly uses his sampler to inject echo-laden voice overlays to generate existential overtones as the band's penetrating game-plan, huge arsenal of tricks, and clever sound designs are but a few of many glowing characteristics throughout.