BY MARK CORROTO
November 15, 2017
Sign in to view read count 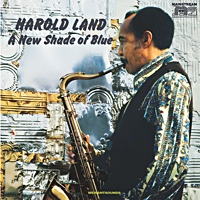 What came first, craft beers or the revival of vinyl records? I ask because both revolutions have moved your collective attentions away from corporate culture to smaller more specialized boutiques. That means better beer and certainly a more diverse choice in music. Case in point, saxophonist Harold Land's A New Shade Of Blue originally issued on Los Angeles' Mainstream Records in 1971. When the big record companies were touting their answer to rock-and-roll with electric Miles and Herbie, producers like Bob Shad were advancing modern jazz without ignoring its past. Land cut his teeth on hard bop before adopting modal sounds and joined vibraphonist Bobby Hutcherson's sessions for Blue Note Records (1968-1971).

The pair were living in Los Angeles in 1971 when these sides and Choma (Burn) were recorded for Mainstream. Back in the day, if this disc were released by Columbia or Blue Note it would have garnered praise it deserved with the stellar lineup of Hutcherson, Bill Henderson, Buster Williams, Billy Hart, and James Mtume. The music is a mix of modal jazz with undercurrents of hard bop. The title track is a casual blues piece suitable for players to stretch out a bit. Land solos first followed by Hutcherson, Henderson, and the sweetness that is Williams' bass. "Short Subject" is a knockout swinger and "Dark Mood" a modal piece with Land acknowledging the influence of John Coltrane on his sound. Although it was the only piece here not written by Land, "Mtume" is the centerpiece of the recording. It was also a composition recorded the same year on Hutcherson's release Head On (Blue Note) with an eleven-piece ensemble. The music, dedicated to the conga player, is a nod towards world music (a term not yet applied to the style) and it samples both African and Spanish flavors, with Henderson on electric piano. Even though it may have taken nearly fifty years to get the attention it deserves, A New Shade Of Blue is indeed a minor classic of jazz. The music is available in digital format, CD, and of course as an LP.