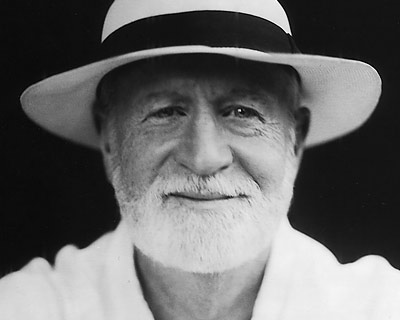 Joe Henry's strategy for coaxing Mose Allison back to the studio for the first time in twelve years was simple enough: All he had to do was quietly and thoughtfully stalk the jazz icon for a year.

"He kept at it, and kept calling me and emailing and so forth," the 82-year-old Allison said of the courting process by Henry, who received two Grammy nominations this month for his production on Allen Toussaint's The Bright Mississippi and Ramblin' Jack Elliott's A Stranger Here. "And so I finally decided, 'Well, what the hell, I haven't done a record in a long time.'"

That record is The Way of the World, due out in March on Anti, home of Tom Waits, Neko Case, the Swell Season and Henry himself. And while the playbook in such projects tends to dictate that producers working with long-dormant icon types defer to the scraped-to-the-bone-essence treatment, Henry has taken the other road, surrounding Allison's wry, sharp verbal edge and piano-based bop with a warm, comfortable-sounding and surprisingly full band. "That's always the balance," Henry said. "How do you make a record that's not like forcing a concept, that sounds very authentic to an artist that we all know and care about, and doesn't sound like a rehash of somewhere that they've already been?"

Allison opens the record with a sly, slippery tour of his molecular structure ("My Brain," a "cool little cluster" that's "losing power/1,200 new rhymes every hour"), covers his friend Loudon Wainwright ("I'm Alright"), furnishes a jaunty saloon piano instrumental ("Crush") and, in the record's most crackling moment, delivers a "Modest Proposal" on religion that springs from the same sharp, dark corners as "Everybody's Cryin' Mercy" or "Your Mind Is On Vacation": "Let's give God a vacation/He must be tired of it all," Allison sings, "Rigging the game/taking the blame/24 hours a day on call." (Later in the track he advocates giving "Jehovah a breather.")

But Allison, whose songs have been covered by everyone from the Clash to Van Morrison to the Who ("That's on a video game now," Allison says of the Live at Leeds version of "Young Man Blues"), remains seemingly bemused at the continued attention. "A lot of people like (the record); my kids and my wife like it," Allison said. "But I don't like listening to myself so I haven't decided what I think of it yet."

Henry hadn't yet met Allison—who once appeared on a pretty fantastic 1975 broadcast of "Soundstage" with Waits, which is available in chunks on YouTube—when he invited him to a music festival the producer was curating in Germany. "I don't think I even thought about it," Henry said. "I just heard myself say, 'Well, the first thing I'd want to do is invite Mose Allison.' Really, it was just an excuse for me to be in his orbit."

From there, the plan was hatched. Henry said he spent more time pursuing the Allison project than any other he's done, much of it with pen in hand. "Mose doesn't do email, so what I started doing was writing long letters that (Allison's wife, Audre) would print out and put on the breakfast table. It was like a letter-writing campaign," Henry said.

After about a year, Allison not only agreed to the idea but gave Henry the controls. "It's what I do," Allison said, "But it's not the kind of record that I've made before."

The project quickly found a home at Anti. "If we'd have done this exact same project and it came out on Blue Note—and I'm a huge fan of Blue Note—it might have seemed to maybe a lot of people and even jazz writers, 'Here's another Mose Allison record,'" Henry said. "The fact that Anti is putting it out inclines a lot of people to think twice about what it might be."

Rather, the trick was determining which colors to add to Allison's brushes. "I don't think he's had a record with acoustic guitars and mandolin on it, and I loved the idea of putting those things against tenor saxophone, for example," Henry said. "It confuses the genre in a way that Mose has always confused the genre. He's been, in a way, too bluesy for jazz purists, much too jazzy for blues purists."

Allison keeps up that confusion on the road, playing about 100 nights a year, a work ethic Henry says he's just happy to be around. "This idea that the record industry is and should be youth-oriented is ludicrous," said Henry, who's currently working on a number of projects with Harry Belafonte, also 82. "I care about experience. It's a very three-dimensional experience to listen to new music from somebody with whom you have a passion and a history. Sure, it's nice to meet new people. But there's nothing like the communion you can have with somebody with whom you share a great common history. True personally, true artistically."