By Mark Corroto
September 15, 2007
Sign in to view read count 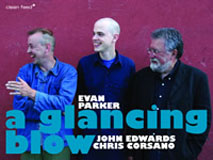 The music of saxophonist Evan Parker is an acquired taste. But, then again, so is pesto with fresh anchovies and the perfect espresso with just a cube of sugar. I'm sorry, but I digress.

Like all the great jazz players he has created his own language. Think of Louis Armstrong calling Dizzy Gillespie's sound "Chinese music or that Ornette Coleman's music once caused a riot. It might be difficult to step back in time to understand the confusion over Ornette's music or that of Thelonious Monk, whose vision is now accepted into the jazz canon. Evan Parker holds that most sacrosanct title today. Listeners idolized his sound or reject it as Armstrong once did of Gillespie, or as folks once thought of Armstrong himself.

Parker's is the music of extended technique, the language of chirps, multiphonics, and circular breathing. Immediately identifiable, his sound is perhaps the next progression of the spirit of John Coltrane's final hours.

Parker has worked solo, but has also produced some fine trio sessions with Alexander von Schlippenbach and Paul Lovens or perhaps his most famous with Barry Guy and Paul Lytton. Here he is matched with a longtime collaborator, bassist John Edwards from the London Improvisers Orchestra and many an Emamen recording, and newcomer/percussionist Chris Corsano. Corsano, born in the US is most known for his collaborations with saxophonist Paul Flaherty and most recently in their band Cold Bleak Heat.

A Glancing Blow is a live recording from 2006 at London's New Vortex. The trio plays two lengthy tracks of twenty-eight and nearly forty-eight minutes. Its nontraditional compositions are suite-like improvisations, as the tempo and rhythms shift in and out and the players contribute, sit out, and play off an idea or the energy of their partners.

Theirs is a music of no beginnings and endings that appears out of thin air. The language spoken is both energetic and meditative. Corsano can play the colorist role or, when enabled, the provocateur. His highlights are the subtle shadings of tom-tom and cymbal, the completion of a remark made by his partners. The music changes directions, not like a traditional composition, but with a flow of energy. The quiet intensity of Parker's saxophone can be like syrup, making it's way from a high spot to a lower one. With a trio he has less of a burden to carry (as he does with his solo performances) and his thoughts come unhurried and with much deference to Edwards.

For his part, Edwards doesn't so much keep time as he spreads it. His performance on bass is that of slaps, plucks, bowing, knocks, and all other physical manipulation of his instrument.

Together, the trio molds these two extended performances into an abstract, but consistently satisfying presentation of very thoughtful free jazz.

A Glancing Blow; Out Of The Pocket.