A Fireside Chat With Gerald Wilson

You will find that people in the jazz world are good people. You

Within the pages of Central Avenue Sounds, Gerald Wilson recalls, “In February of 1940 I came to Los Angeles with the Jimmie Lunceford band.” He emphasizes, “I’ll never forget that day in February. As I looked out the window of my bunk in the sleeper, I see this beautiful sunshine. We were somewhere like San Bernardino. And I said, ‘Well, this is going to be the place for me.’ And when I got to Los Angeles and I saw how pretty it was, I said, ‘This will be my home.’” How fortunate Los Angeles has been to call host to such a musical legend. It is an honor to present Mr. Gerald Wilson (unedited and in his own words).

GERALD WILSON: My mother was a musician, played piano. She was a schoolteacher. She started all of us on piano when we were about four or five. I’ve been in it ever since.

FJ: Tell me about your time in Jimmie Lunceford’s band.

GW: To get to Jimmie Lunceford, you had to have a whole lot of years. I joined when I was nineteen, but before that period, I played in a band in Memphis, Tennessee. I played music before I left my home in Shelby, Mississippi. I even played when I was ten years old, played the trumpet. In 1939, I joined Jimmie Lunceford. He gave me a lot of pointers on watching him and seeing how to be a bandleader and how to try to be a good musician. He was a good musician, played two or three instruments. He could write and had a band since his college days. They were on top. They were the top musicians in the world. It was another place to go to school. I started doing my writing there. However, I studied it in school. I studied orchestration and harmony with different teachers and I studied very thoroughly. I could already write. I joined them in ’39 and they recorded my first number in 1940. It was a hit for that band. They recorded my second number in 1941. It was another hit for the band.

FJ: But after three years, you left the Lunceford band.

GW: At the time I left Jimmie Lunceford, I was to go into World War II. I had to get ready to go to the service and that is what I did. I moved here and made my home here, even before I left the band. I came here to Los Angeles to stay and wait until I got called. During that period, I had some more experience. I joined Les Hite’s band. It was one of the great bands from California. Benny Carter came out during that same year, 1942, and I joined his band and stayed until I went into the Navy. I was in the Navy in ’43 and ’44. I was in the band that they had there. They just honored us a couple of months ago. We were the first blacks in the United States Navy. Of course, that was another school. It was a good time for learning and doing what you had to do.

FJ: How vibrant was the Los Angeles musical landscape upon your return in the mid-Forties?

FJ: With fortune favoring you, what prompted your hiatus?

GW: It was obvious to me, in two years, my band played in New York, the Apollo, Philadelphia, Pittsburgh, Chicago, St. Louis, we played everywhere you can play. We were up there with the top guys. I had Joe Williams singing with my band. We were on top and I realized that I hadn’t even started to do what I wanted to do musically. I wanted to study and do other things. So I decided to disband and study for a few years. In 1948, Count Basie asked me to go away with him for a few months. I went with him and I stayed for two years. That was another place to go and learn. It was another school. I wanted to write for TV and I wanted to write for the movies and I got all those opportunities. I wrote for the Philharmonic. Zubin Mehta conducted all of my numbers. I had five orchestrations in that book and one original composition. It all went my way. I’ve done everything there is to do and now I am into doing what I love, which is jazz.

FJ: How much of an importance do you place on developing compositional and writing skills?

FJ: Having given so much to Los Angeles by visiting public schools and giving clinics, has the community given back to you?

GW: Yes, of course, I love being in the schools. My mother was a schoolteacher. I love being in the schools. I went to replace a fellow at Cal State Northridge for six weeks and I stayed there for thirteen years. When I went there, they had about forty people in the class and when I left, they had just what the auditorium could hold, around two hundred. Then I went to Cal State L.A. and was there six years. The same thing happened there. Then I went to Cal Arts for a couple of years and then I went to UCLA and have been there for twelve years. So you can see, I have about forty years at the college level of teaching my class. My class starting in September will have four hundred and eighty students. That is the largest jazz class in the world.

FJ: What do you try and impart to your students?

GW: The first thing I want to teach is how to try to be a better person. I do that in music. I try to do the best I can. I try to be a good person. I hope I’m a good person. I love people. I love being with them. I want to emphasize the difference between right and wrong. When you leave my class, you’re going to know where jazz came from and when it came and who did it. You will know that and you’ll be able to talk with anybody that wants to speak with you about jazz.

FJ: Where did jazz come from?

GW: Jazz is the music of the black people. It started with the slaves even before they were freed, they were playing jazz. They have carried it on. They have developed it. In the beginning, it was only played by blacks. Whites didn’t even let their own people play it, forbid them to play it. But now, everyone plays it, no matter what you are. Now, the new styles have come in to where it is so technical and so refined. The young guys like Marsalis, Roy Hargrove, and Terence Blanchard, these giants of the trumpet. The point is, it is their folk music. So they don’t have to struggle to play jazz. Jazz is their life. It is my life.

FJ: And it’s been life worthy of mention.

GW: Yes, I’ve met many people in the jazz world. You will find that people in the jazz world are good people. You’ve got to be a good person to play jazz. If you have a bad feeling and everything is negative, you can’t make jazz. You have got to be free so you can play and your goodness can come out. When you are bad, you’re not for jazz. I think jazz is a good thing for a person.

GW: Yes, of course. Jazz integrated in 1920. Black and white musicians started working together then, in 1920. They continued on and all of the sudden, jazz was already integrated. Benny Goodman came in and integrated it more, and Artie Shaw. It integrated long before segregation was banned in the United States.

GW: Yes, first of all, Fred, the reason I did it in New York was I was at the IAJE last year in Toronto. I was there to conduct the University of Michigan’s jazz orchestra on a couple of numbers. While I was there, I ran into all of my friends that I had worked and played with, Jimmy Heath. We had played with Dizzy Gillespie together. Also, I ran into Frank Wess. I saw Kenny Barron and I’ve known him for a long time. The idea came to me that I should make an album in New York. I owed New York a lot. I lived there all total of five years. I went back and forth with Ray Charles. I was in New York all the time. I learned so much in New York. I thought I should go back and work with my friends again and make an album with them. I can give something back to New York and repay what they gave me. I love the place. It is a wonderful place and you have to live there to know how wonderful New York is.

FJ: You have received countless awards and accolades, but when Mosaic put out the box set a few years ago of all your Pacific Jazz recordings, I knew your work was finally being recognized beyond the Southern California borders.

GW: Yes, I have done the best I could. Los Angeles is my home. I have lived here for about sixty-two years. It is my home. I love it and this is it. It is a great city.

FJ: As much as this city has given you, you have given more than enough back.

GW: I hope I can give some more (laughing). 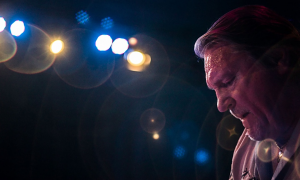 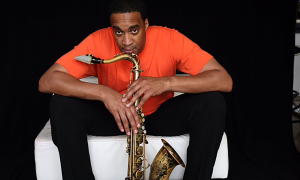