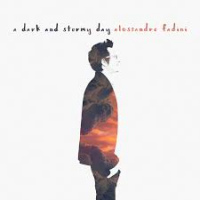 Amongst the firehose-like blast of CDs and downloads aimed at me last summer was A Dark and Stormy Day, the debut album by Italian-born pianist and composer Alessandro Fadini. A new name to me, Fadini was educated to be a mathematician and is apparently self-taught on piano. Don't let that fool you, though. A protégé of Marc Copland, Fadini's chops as a player and composer are formidable. Fierce, even. As a soloist, he has an impulsive nature and his improvisations have all sorts of interesting asides. When these seemingly-offhand phrases turn into thematic elements—as on "Starting Something"—it's a pleasant surprise.

As good a player Fadini is, though, it's his composing that's most striking. Somehow, Fadini marries 21st century complexity and far-ranging musical tastes with good ol' tunesmithing. The result: badass 21st Century jazz that's consistently subtle and inviting. Check out "All the Rest Is Boredom," which juxtaposes dissonant staccato phrases with harmonically-friendly, rhythmically-languorous passages that build into exciting, up-tempo spaces for improvisation, or the balladic "Elegy for the Living Dead" which expresses a sort of resignation without getting lost in its own emotion. Like an increasing number of young players on the New York scene, Fadini is not afraid to play less at times; witness his gently cascading, solo piano intro to "No Thrills." The tune itself, though, is one of those nutty, almost-spastic stop-start things that makes one wonder how much these guys have to rehearse.

Of course, Fadini has great band behind him. Because most of my listening is done while driving to and from work, I do not look at cover art very much. The album opens with a solo saxophone improvisation, and there's quite a bit of very piquant alto saxophone way out in front throughout A Dark and Stormy Day. So, I assumed Fadini was a saxophonist. In fact, Josiah Boornazian is the man behind the reeds here, and he is a very nimble and forceful player—in the mold of John O'Gallagher—with an almost piercing tone. When he lays back a bit, as on "Elegy for the Living Dead," his sound broadens in a most appealing way.

In the engine room are Luke Markham and Jakob Dreyer. Fadini and Markham are particularly well-suited, and it came as no surprise to learn that the two maintain an ongoing an all-electronic duet project, as well. No electronics here, though Markham's polystylistic percussing belies an interest in all sorts of non-jazz topics. Here, he's perfectly appropriate; pushing when needed, brushing effectively, filling creatively and even changing the sound of his drums a bit from track to track. On his own composition "Mayall's Object" and Boornazian's "Window Ledge," for example, it seems he's placed some sort of muffling device on his toms. A good move as both tunes require a busy-but-laid- back approach, and his freewheeling solos on both provide some of the album's highlights. German-born, New York-resident bassist Dreyer has worked with brothers Andreas Böhlen and Sebastian Böhlen. Like the rest of the band he can really play. He makes lots of interesting note choices during Fadini's and Boornazian's solos, prodding them into interesting harmonic territories.

Extremely well-executed, yet playful and whimsical, A Dark and Stormy Day captures an exciting young band doing what they do best. It's kind of hard to believe that this is a debut album... but it is.