Papanosh: A Chicken in a Bottle 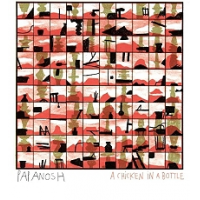 Papanosh originate in the northern French city of Rouen and have been together over 10 years. This second CD of somewhat discordant, deconstructed hard bop is another example of their concept of an imagined folklore, a new musical tradition created together by musicians and listeners in their shared synergy. It involves widely varied music that, with its sudden twists and surprises, seems at times to be being played with five tongues in five respective cheeks.

With most melodies revolving around the interplay of the tenor or alto sax of Raphael Quenfren and the trumpet of Quentin Ghomari there is much to remind the listener of both Eric Dolphy (the inspiration for the album title!) and Monk. The tunes tumble and rollick often with a very danceable rhythm propelled by Jérémie Piazza on drums and bongos, and Thibault Cellier on bass. Indeed the five musicians are responsible for all but one compositions, and all could be considered as a leader of the ensemble.

Maybe though the one cover version brings out the true mettle of the band, a slinky version of George Stone's Plain Gold Ring, originally made famous by Nina Simone and more recently Nick Cave. With the two horns blowing over a prepared piano riff it suggests subtlety and more than a hint of temperament beneath the surface. When these sounds fade the band launches straight into Cellier's rumbling, raunchy El Toro, punctuated by stabs of Sebastien Palis' Hammond  style organ, and we are back on a roller-coaster trip of contemporary bop.

These musicians are deservedly gaining recognition outside their homeland, having taken it this year to Winter Jazz in New York, as well as recording there with Marc Ribot and Roy Nathanson. We must wait and see which direction they will be taking with their music after this cheeky offering. To finish this album, another soulful piano centered ballad is dedicated to an unknown individual, 'Pour André. One can only guess that it is a current godfather of French style, but true to style the listener must provide his or her own associations (Gide, Previn, Agassi...?).