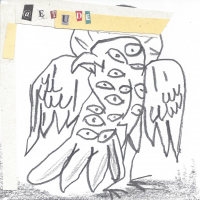 Christopher Marsceill may be based in northwest Philadelphia, but a casual listener could just as easily believe it was Nashville or New Orleans—not just because he goes by Rev Chris in polite company and otherwise, but because he and his amiable High Rollers band share a love for earthy horns and Dixie swing. This lineup's first recording @etude offers a fun melting pot of largely Southern gumbo with high camaraderie and high spirits.

The leader's mostly-electric piano makes a soft and sprightly bed for the horn duo to caper over while the shuffling rhythm players stomp their hearts out. New addition Thomas Razler on sax adds a dose of Philly soul in spots like the brightly bouncing "Gene Pullen," while Bart Miltenberger's trumpet brings us to the heart of N'awlins with dashes of creole and cabaret. Marsceill's time living in that town obviously left some permanent effects, judging by "Huddle House Honey"'s zoot-suit swagger or the ragtimey blues of "The Sun Is Gold" (not to mention the brief straightforward homage to Allen Toussaint). Touches of the French Quarter and Professor Longhair are never terribly far away.

Mostly there's little need to step up to the mike, though the Rev's light drawl occasionally adds to the old-time vibe in a charmingly low-key manner. For the most part he's happy to stick to the keys and let the band do what they do best. The High Rollers' friendly chemistry is palpable throughout. It's a recording that was made with everyone live in the same room, and there was no inclination to overthink or over-polish while letting the good times roll. The attitude of @etude is one of bright celebration; it all makes an invitingly upbeat listen from a sharp crew ready to carouse till the sun comes up.