By John Kelman
January 7, 2011
Sign in to view read count 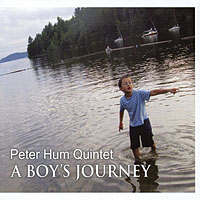 Some believe that to be a "real" musician it's all or nothing—no part-time venture; it requires flat-out, full-on commitment. The truth is that it is possible to be full-time in spirit, even if not always in practical terms. As writer/editor for The Ottawa Citizen newspaper, Peter Hum has been involved with music from another angle for most of his adult, with his fine Jazzblog.ca blog receiving plenty of praise. A meticulous planner, the Canadian pianist has been quietly working towards an album decades in the making, but clearly worth the wait.

Hum recruited four exceptional players for A Boy's Journey who, with the exception of Guelph-based drummer Ted Warren, were Ottawa-raised but are now spread across three countries and two continents: tenor saxophonist Kenji Omae in Korea; alto/soprano saxophonist Nathan Cepelinski, finishing up at Boston's Berklee College of Music; and bassist Alec Walkington residing in Montreal. What's most surprising about Hum's debut, then, is how it resonates with the feel of a familiar group, rather than one that's simply come together for a recording.

Much of this has to do with Hum's all-original program, a mix of heady arrangements and open-context charts that provide plenty of moving space, all within a modern mainstream axis that draws on everyone from Brian Blade's Fellowship to Cannonball Adderley for inspiration. The opening "Take the High Road" sets a high compositional bar, Hum's light touch and majestic voicings introducing a lightly swinging 6/8 theme where Cepelinski and Omae orbit around one another—at times in unison, elsewhere alone, and at other times in broader harmony. Hum also proves a thoughtful and astute arranger: Omae's opening solo begins in duet with Walkington before turning incendiary over Hum and Warren's energetic support, while Cepelinski's equally impassioned solo begins alone with Hum's spare voicings, before the rest of the group enters.

Hum may not take his first solo until well into the ambling "New Toy," driven by Walkington's unshakably swinging bass line, but with an assured touch and carefully conceived ideas that eschew "look at me" pyrotechnics, his unhurried confidence is also worth the wait. Elsewhere, on the equally deliberate a capella miniature, "La tendresse, s.v.p.," Hum's temporal pliancy and economic grace reveal a player with sure instincts.

Hum switches to electric piano for the lithely funky "Big Lou" and even more soulful "Sojourner's Truth," a blues whose singable, unison saxophone melody and denser piano voicings could have come from Steely Dan's Donald Fagen, as Hum gets down with his bad self to reveal an unexpected groove-meister. Omae's paradoxically controlled yet unfettered solo positions him alongside Cepelinski as saxophonists deserving to be heard by fans of Chris Potter, Donny McCaslin and Seamus Blake.

Often years in the making, debuts demand the confidence to say, for the first time, "enough's enough; it's ready." With A Boy's Journey, Hum makes clear, in no uncertain terms, that he's ready. Hopefully Hum is already planning the follow-up to a session that, now two years old, deserves to generate some forward momentum for a pianist who may be part-time, but is never less than fully committed.