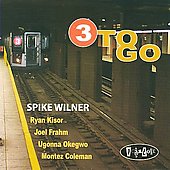 At a small jazz festival a few years ago the advertised theme was a celebration of Duke Ellington's music. But some featured acts, including one highly regarded younger pianist, obviously hadn't taken the theme very seriously, his only begrudging nod to it being a rendition of the jam session standby, "C-Jam Blues," hardly a tune representative of Ellington's artistry. Pianist Spike Wilner demonstrates a better, more thoughtful and creative approach in the two pieces of Ellingtonia included on this urbane quintet CD.

One track is Duke's fetching ballad "Brown Penny," originally a song from the 1946 Broadway production of Beggar's Holiday, the melody treated caressingly by Ryan Kisor's trumpet and Joel Frahm's tenor sax, framing a lyrically limpid Wilner solo. The other is "Reflections in D," a piano feature recorded in a trio by Duke that Wilner affectionately fleshes out to a quintet version, further revealing the dimensions of the sumptuous theme. Like those two surprising examples of Ellingtonia, the rest of the album is marked by Wilner's fresh, or freshly imagined, repertoire choices and loving attention to detail in arrangements that draw equally on the best traditions of swing and bop, suggesting a kinship to the jazz recordings of the '50s that featured musicians and arrangers conversant in both idioms.

The CD opener is a hard bop treatment of the 1929 Jack King/Dorothy Parker song "How Am I To Know?" (To find out how it sounded as a ballad, see Ava Gardner sing it in the film Pandora and the Flying Dutchman). "The Breeze and I" playfully winks at the tune's lounge lizard popularity; "The Lamp Is Low" swings with a gently rocking edge and Dizzy Gillespie's "Con Alma" eschews the Latin tinge to become a straight, rolling jazz waltz, Kisor's solo recalling the poignancy of Chet Baker. A highlight throughout is the logic and lucidity of Wilner's solos, most of them clearly drawing on the melodies as well as harmonies of the material.

How Am I to Know; Three to Go; Brown Penny; The Breeze and I; The Lamp Is Low; Black Forest; Reflections in D; Con Alma; Mr. Mags.