Bill Dixon: 17 Musicians in Search of a Sound: Darfur 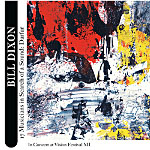 Trumpeter Bill Dixon works with an orchestral conception, even when playing solo, so it is fascinating to hear what happens when he has 17 musicians at his disposal. Dixon first came to prominence as the organizer of the 1964 October Revolution in Jazz, and later taught at the prestigious Bennington College in a near 30 year tenure. Few of his large ensemble works have made it to disc, but this piece, commissioned by Arts For Arts, and recorded on its premiere at the 2007 Vision Festival follows closely after Dixon's recent work with Rob Mazurek's Exploding Star Orchestra (Thrill Jockey, 2007), and hopefully signals renewed interest in his oeuvre. For this work Dixon assembled a cast of long time associates, collaborators and downtown New York stalwarts, for a group dominated by low end horns, bass and percussion.

Tracked as 13 pieces, several less than 45 seconds, upon listening the 56 minute piece broadly breaks down into six sections, starting with looming instrumental voices in the eerie landscapes of "Prelude" and "Intrados," before Dixon deploys portentous sonic monoliths, nonetheless crammed with aggregated detail, in movement of almost tectonic grandeur. The piece progresses by way of incremental accumulation of density, passages building only to subside, culminating in the magnificent 23 minute "Sinopia," building from JD Parran's lone bass saxophone, to a churning crescendo, which is suddenly cut, eliciting whoops of delight from the audience. Finally, the four "Pentimentos" signal journey's end with a return to the earlier blocks of ensemble sound.

Constructed from instrumental bursts of varying duration, sometimes in unison, other times looser, it is hard to discern what of the ensembles is composed and what is extemporized, which is just how I like it. For such a large group there are frequent dynamic shifts, with single voices or small group susurrations pitched against a phalanx of bottom end textures. Though primarily an orchestral work, distinctive voices emerge briefly, before being subsumed within the orchestral mass, such as Taylor Ho Bynum's whistling, squealing, querulous cornet on "In Search of a Sound," Andrew Raffo Dewar's keening soprano saxophone on "Darfur," Dick Griffin's multiphonic trombone in "Sinopia," or Karen Borca's buzzing bassoon in the same piece. Dixon's trade mark echoed trumpet is not heard until nearly halfway through, though that is immaterial given how thoroughly his conception shapes the flow of the music. Indeed it is hard to think who else could deploy such forces to such deft effect, creating a towering work in a class of its own.

One downside of the live recording are the sometimes lengthy pauses between sections, which disrupt the flow for the listener. But the sound is sharp for such a large ensemble in the Angel Orensanz Center with its high ceilings, and a credit to the recordist Stefan Heger, and the mixing of Nick Lloyd at Firehouse 12. The last two minutes of the 2.41 "Pentimento IV" are given over to applause, from what must have been a standing ovation. Well deserved.