By Glenn Astarita
November 10, 2006
Sign in to view read count 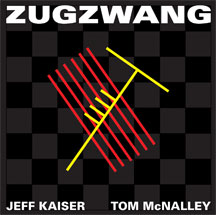 Southern Californian experimental improvisers Jeff Kaiser (trumpet, electronics) and Tom McNalley (e-guitar, electronics) embark upon a mischievously bizarre sojourn here. Call it what you will, but this studio session serves as the epitome of crazed-out, avant garde sound-sculpting where just about anything is liable to occur. For the record, this is not spacey New Age-type fodder. However, the artists delve into a variety of moods, exploring angst, humor and alien soundscapes. McNalley's electric guitar phrases are generally concise and steeped in distortion; the duo fuses loops and ominous effects into the grand mix. In certain segments, Kaiser's ethereal and oscillinating quarter-tone trumpet lines intimate a harrowing musical vista.

The duo develops an off-the-wall musical documentary via wide-open improvisational flurries and expansive clusters of sound. But it's not all about bombast. They frequently delve into revved-up free-form extrapolations offset with searing, phantasmagorical electronics-drenched mania and subtly climactic inferences. Cosmic meltdowns often take precedent; on "Aristotelian Blockade, the musicians generate a cyclical, trance-inducing state of being. Fans of Kaiser, for example, shouldn't be shocked by this material. But I'll go out on a very short limb by affirming that this production is not geared for weak hearts or unadventurous minds.