By Donald Elfman
November 10, 2006
Sign in to view read count 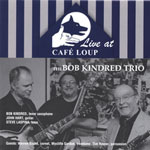 Classical clarinetist Richard Stoltzman once said, "...I wish I could play Mozart like Bob Kindred plays jazz, referring to his simplicity of tone, directness and emotional truth—all of which can be heard at the weekly brunch at New York's Café Loup which this engaging live disc documents. Kindred got his chops playing with organists Shirley Scott and Groove Holmes, and later in Woody Herman's big band.

The brunch and the subsequent gig came about when café owner Lloyd Feit met Kindred on the street in New York and ushered him into his restaurant. Feit proved to be a solid jazz fan and hired Kindred for his brunch. The group—also including guitarist John Hart and bassist Steve LaSpina—plays inventive jazz with an accent on great tunes and a solid feel for years of jazz tradition.

Kindred opens this appealing outing by swinging his heart out on the Dietz/Schwartz ballad "Alone Together. It's not a ballad here, though; Kindred forcefully states the melody and then kicks into a solo that beautifully respects the tune as well as sailing off into the sunshine. Hart comps effectively, and both he and LaSpina offer a solid rhythmic base. And that's basically the lovely story throughout—an emphasis on good tunes ably and inventively played by masters.

They tackle songs of Sonny Rollins, Cole Porter, Duke Ellington and more, and they're able to switch gears seamlessly without losing momentum. To add color, Kindred has invited guest stars Warren Vaché and Wycliffe Gordon—on cornet and trombone respectively—and they play a spritely yet poignant tribute to the drowned city. And Tim Horner, who has often graced the Maria Schneider Orchestra with his richly powerful drumming, is here heard to quieter advantage playing percussion. The jazz on Live at Cafe Loup easily transcends the brunch category.

Alone Together; Do You Know What It Means to Miss New Orleans; Skylark; Playin' in the Yard; Tenderly; Dream Dancing; Doubletalk; In a Mellow Tone; Sweet and Lovely; Memories of You.